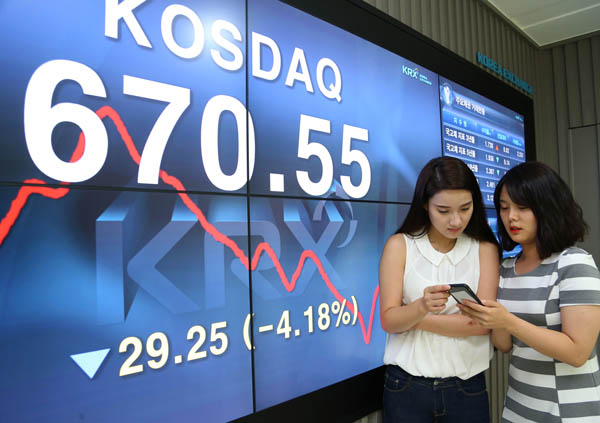 A board at the Korea Exchange in Yeouido, Seoul, on Wednesday shows the Kosdaq falling more than 4 percent. The secondary market during the day fell more than 6 percent before recovering at the last minute. [NEWSIS]

Just when the Korean economy thought the worst was over with the end of the Middle East Respiratory syndrome outbreak, a new crisis has put it back on the brink: China.

Analysts are already speculating that the government’s optimistic view of the Korean economy in the second half of the year is being pulled apart by problems spilling out of China, and growth may definitely fall short of the Bank of Korea’s 3.1 percent projection for the latter half of the year.

The Kosdaq saw a sharper drop as it ended 4 percent lower than the previous day to close at 670.55. During the day, it fell as much as 6 percent.

In the last three days, the Kosdaq saw 15.7 trillion won ($13.2 billion) vanish as its market capitalization shrunk to 185.9 trillion won from 201.6 trillion won, as of Thursday. The market was closed on Friday to celebrate Korea’s independence from Japanese colonial rule 70 years ago.

The shock from the Kosdaq was particularly large because last month, it reached an eight-year peak of 782.64, and some hoped it would go on to break a new record of 800.

The stumbles of both markets were blamed on Chinese stocks, which fell more than 6 percent on Tuesday. On Wednesday, the Shanghai index closed after gaining 1.23 percent from the previous day. But during the day’s trading, it fell as much as 3 percent.

Analysts say foreign investors are selling shares because they are unnerved by the specter of slowing growth and currency depreciations in Asia’s emerging markets, particularly that of China. They are retreating to developed markets.

The fall in Korean shares was mainly caused by bad signs in the Chinese real and equities markets, analysts said, as well as intensified uncertainty ahead of the U.S. Federal Reserve’s July Federal Open Market Committee meeting report to be released this week.

It is unlikely the Korean market will rebound any time soon.

The overall economy is being hit by a slowdown in export growth and weakening local consumption. Asia’s fourth-largest economy is widely expected to miss the central bank’s forecast for 2015 growth of 2.8 percent. Many analysts say even achieving a mid-2 percent range of growth could become a challenge.

According to recent central bank data, the country’s second-quarter GDP growth came out to a mere 0.3 percent, slowing down from 0.8 percent in the previous quarter and below the 0.4 percent forecast earlier by the central bank.

Moody’s, a rating agency, recently lowered its Korea growth forecast for 2015 to 2.5 percent from its previous estimate of 2.7 percent.

Two major factors holding the economy back are weakening exports and domestic consumption.

Korea’s domestic consumption is seeing negative growth, as a combination of a weak labor market, sluggish income growth and rising household debts have made local consumers unwilling to spend.

Domestic consumption saw negative 0.3 percent growth in the second quarter, according to Bank of Korea data.

Many are watching the local real estate market, which, after seeing a brief pickup, seems to be subsiding. The volume of unsold homes is on the rise.

According to data from the Ministry of Land, Infrastructure and Transport, unsold residences stood at 34,068 at the end of June, up 20 percent from May’s 28,142.

And exports, while growing, are not looking very healthy. Korea’s exports in the second quarter grew by 0.1 percent quarter-on-quarter.

Slowing exports to China is a major drag, as the country is Korea’s No.1 export destination. According to Statistics Korea, the nation’s exports to China amounted to $11.2 billion in the second quarter, down 6.4 percent from a year before.

“Slowing growth in China and instability in its financial markets are expected to further chill Chinese consumers’ sentiment,” said a researcher at the Korea International Trade Association. “The exports slowdown will probably continue into the third quarter.”

The two companies’ combined Chinese market share, which on average stood around 10 percent, fell to 7.3 percent in June.

“Chinese competitors are aggressively expanding their market share with more competitive pricing, and even other foreign brands like GM and Volkswagen have started offering steeper price cuts,” a Hyundai Motor official said.

The yuan’s depreciation, which Beijing has set into motion to keep its own export machine humming, is set to further dent Korean exports’ competitiveness.

The Hyundai Research Institute estimates that if the yuan falls 5 percent against the won, Korea’s volume of exports will decline 3 percent.

According to the Korea Exchange, companies on the Kospi saw their sales during the first half of this year decline by 4.7 percent and net profits decline 1.4 percent compared to a year before.

“Companies were somewhat helped by energy price declines, but competition is seen intensifying in the manufacturing sector in particular,” said Park Hee-chan, an analyst at Mirae Asset Securities.