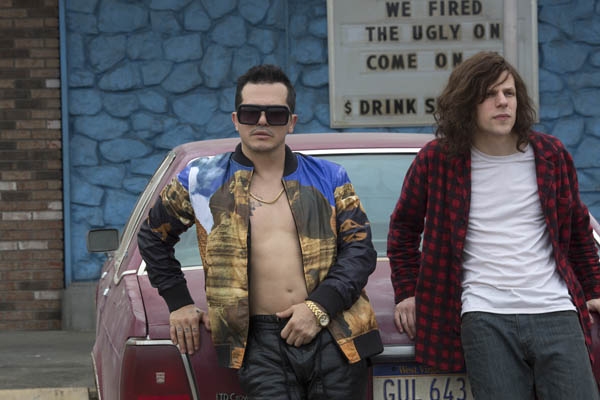 In this still released by Lionsgate, John Leguizamo, left, and Jesse Eisenberg appear in a scene from “American Ultra.” [AP/NEWSIS]

The likably awkward chemistry of Kristen Stewart and Jesse Eisenberg remains intact in “American Ultra,’’ a violent stoner action comedy that’s half “Pineapple Express,’’ half “The Bourne Identity,’’ and not as good as either.

Stewart and Eisenberg, who starred together in the splendidly low-key summer comedy “Adventureland,’’ again come together as an appealing, mutually mop-headed tandem that matches Eisenberg’s stuttering unease with Stewart’s deadpan cool.

They play a flannel-wearing West Virginia couple, Mike and Phoebe, happy together despite Mike’s weed habit, perpetual apologizing and panic attacks from just about anything that upsets his seemingly innate inertia. Looking at a car that’s crashed into a tree, he wonders to Phoebe, placating and devoted, if he’s the tree and she’s the car.

The small-town, low-stakes drama of “American Ultra’’ is convincing in the beginning, thanks to the two stars. But it’s a setup.

Unbeknownst to Mike, a convenience store clerk, he’s an elite killing machine trained by the CIA, a decommissioned government experiment. Few in the movies would be a more unlikely secret agent than Eisenberg. Did the program include Michael Cera? Was Woody Allen in charge?

Switching to Langley, the film, directed by Nima Nourizadeh (“Project X’’) and written by Max Landis (“Chronicle’’), fills in the backstory. A petulant young agent (Topher Grace) has risen in the ranks and now wants to eliminate evidence of the experiment that gave Mike his secret talents, overseen by Connie Britton’s more sympathetic Victoria Lasseter.

To prevent her former student’s death, she sneaks to the convenience store and activates Mike with a few code words. When a handful of thugs come to kill him, Mike is astounded to find himself expertly stabbing one with a spoon. Afterward, he cowers behind a lamppost, looking at the bloody wreckage: “I have, like, a lot of anxiety about this,’’ he tells Phoebe.

Much mayhem ensues, surprisingly violent and cartoonish in its extremes. The small town comes entirely under siege. “American Ultra’’ is a stoner’s paranoia come to life. A toothless Walter Goggins joins the strong ensemble as the nuttiest of the CIA’s small army, along with John Leguizamo as a local drug dealer.

The assembled talent could use more character development and a little more wit in place of the sadistic, fun-draining comic-book action scenes that increasingly co-opts the comedy, which is too dependent on the eventually tiresome joke of Eisenberg as action hero.

But “American Ultra’’ has its simple genre charms, thanks significantly to its entertaining cast and leading pair. Stewart, in particular, looks like she’s punching below her weight class. As if often the case, Stewart’s the best thing in the movie. And she and Eisenberg remain lazy losers we can love, Bonnie and Clyde for a more laid-back generation.

“American Ultra’’ will be released in Korea on Aug. 27. Running time: 96 minutes. Two and a half stars out of four. AP