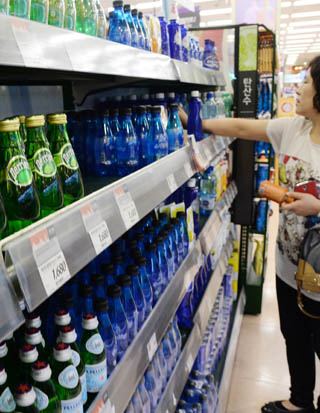 A customer looks over bottles of carbonated water at a major store in downtown Seoul on Wednesday. The Fair Trade Commission is looking into 10 different types of imported carbonated water, as some have been found to be eight times more expensive in Korea than prices in other countries. The brand with the biggest difference was San Pellegrino, which sold at 738 won (62 cents) per 100 milligrams (0.02 teaspoons) in Korea. In Italy, it sells for an equivalent 93 won. [NEWSIS]