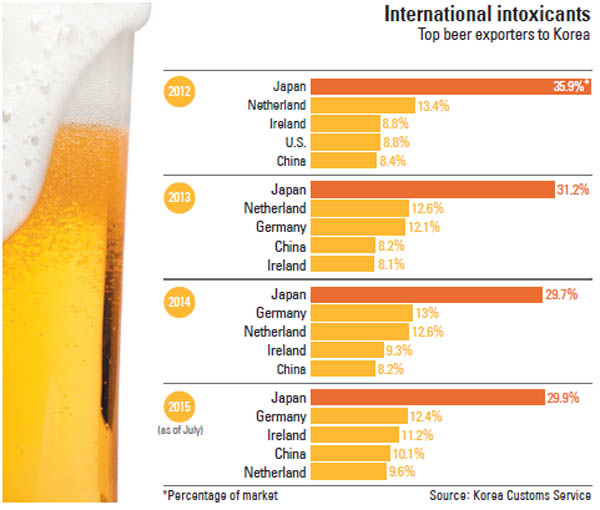 Japanese beers are still the most popular foreign beers in Korea, but German and other European brews are gaining fast, data from the Korean Customs Service (KCS) showed Wednesday.

A report by the KCS said that Japanese beers accounted for 29.9 percent of the Korean market for foreign beer this year, as of July. German beers took 12.4 percent, and Irish beers were third, at 11.2 percent.

German beers, meanwhile, are seeing an upswing. Three years ago, Germany was not even in the top-five imported beers, but in 2013, it became the third-biggest exporter to Korea, accounting for 12.1 percent. Its market share inched up to 13 percent in 2014.

“Over the past three years, German beers grew more than 50 percent on average annually in the Korean market for imported beers,” a Korea Customs Service official said by phone. “It’s because an increasing number of Koreans taste European beers at local pubs and purchase them at supermarkets later.

“With the rising popularity of European beers in Korea, Japanese beer makers are cutting their prices to stay the biggest beer exporters in the Korean market,” he added.

Not all European beers are doing well, however. While German beers are having a moment, those from the Netherlands are being edged out.

In 2012, Dutch beers were the second-most popular foreign beer in Korea, accounting for 13.4 percent of the market. In 2014, they fell to third place, while Germany took second. As of July, Dutch beers sank to fifth, with a market share of 9.6 percent.

On average, Koreans’ consumption of imported beers rose 23.2 percent annually between 2012 and 2014. The total value of the foreign beer market reached its peak in 2014 at $110 million.