Samsung makes most TVs, but fewer are sold

Samsung makes most TVs, but fewer are sold 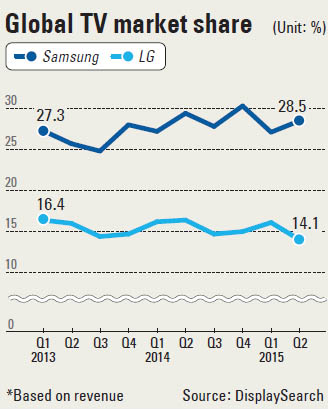 Samsung Electronics retained its position as the world’s top TV producer in the second quarter, capturing 28.5 percent of the global market by revenue, up 1.4 percentage points quarter-to-quarter, according to market research firm DisplaySearch on Wednesday.

TV shipments across the globe totaled 48 million units in the April-June period - decreasing 1.89 million units from the preceding three months - due to a bad economy and a saturated market.

Despite the worldwide drop in sales, Samsung said its share of the global market was meaningful, as the company’s success is largely due to the popularity of its premium TVs.

The world’s No. 1 smartphone producer and memory chip maker identified its premium product lineup as the biggest contributor to holding its position.

The first SUHDTV Samsung rolled out in February is one of its main high-end TV products.

SUHD is a type of ultra high-definition TV, an industry term referring to an LCD (liquid crystal display) TV with 4K resolution, that Samsung has labeled on its own by putting a yet-to-be-identified S for open interpretation. Most SUHDTVs are curved.

The S could stand for Samsung or super, but it symbolizes the improved resolution quality from using quantum dots, or nanocrystals, that can expand the amount of colors that appear and how rich they appear.

“It won’t be farfetched to say that one out of three TVs sold in the HDTV market is a Samsung,” said its spokesman.

Samsung’s share in the UHDTV market stood at 36.4 percent by revenue as of the second quarter, and its slice in the curved TV pie was 80.7 percent.

“Global UHDTV sales surged more than 50 percent in the quarter that ended June 30 from the previous quarter, and curved TVs, in particular, enjoyed an explosive popularity,” said Kim Hyun-suk, president of Samsung’s TV business. On an upbeat prospect of increased interest in curved TVs, Samsung raised the number of types of curved TVs it offers from 13 last year to 21 today. The size now ranges from 40 inches to a huge 105 inches.

Samsung outpaced LG Electronics to become the top TV producer in the first quarter of 2006 on the back of the popular Bordeaux TV, which has a shape resembling a wine glass.

LG was the second-largest TV producer in the April to June period, accounting for 14.1 percent of the market share, down two percentage points from the previous three months.

The third-largest player from April to June was Sony of Japan, which accounted for 7.3 percent of the market.