Seoul can now have its Magnolia cupcakes and eat them too

Seoul can now have its Magnolia cupcakes and eat them too 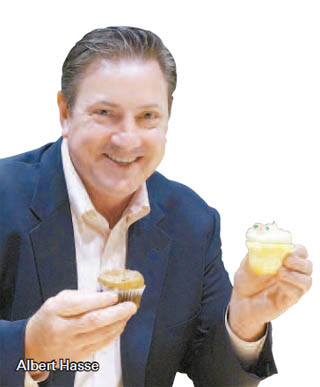 Magnolia cupcakes were first introduced to the Korean audience through the hit U.S. TV show “Sex and the City.” Others first heard of them through Saturday Night Live’s digital short video “Lazy Sunday.”

However, unless they have traveled to New York City, few people will have tasted the famous cupcakes. Until now.

Magnolia Bakery will be opening its doors to the Korean public on Aug. 21 at Hyundai Department Store’s branch in Pangyo, Gyeonggi. It will be the second branch in Asia after Tokyo.

Albert Hasse, vice president of franchise operations at Magnolia Bakery, recently visited Seoul, where he met with the JoongAng Ilbo, an affiliate of the Korea JoongAng Daily, to discuss the opening of its famous cupcake store.

The power of Magnolia cupcakes and the bakery’s philosophy is nostalgia and comfort, he said.

The pastel tone of the cupcakes reminds people of their traditional homes in the United States, while the brand name in light green and the logo with a window and curtain is designed to bring out nostalgia, he said. Magnolia is a flower that can be easily spotted in the southern United States.

Hasse said that for Americans, the cupcake will bring back memories of home, while for Koreans, it will be an opportunity to experience a “small luxury.”

The ingredients may be simple, but the process involved in each delicacy is more complicated. The icing on each cupcake goes through 10 different processes before it is ready.

While the price is high and the cupcakes may not be a healthy choice, Hasse said a cupcake isn’t a daily staple. People buy Magnolia cupcakes for special occasions like birthdays or a wedding anniversary.

He said the bakery feels proud to be part of people’s special moments.

The most popular cupcake is the company’s vanilla butter cream and red velvet.

He said Korean customers who purchase Magnolia cupcakes when visiting the United States seem to favor banana pudding the most, which is rich with soft custard cream and slices of banana.

The bakery plans to first introduce 40 different cupcakes to the Korean audience and gradually increase it to 70.

Considering the uniqueness of Korean consumers, Hasse said Korean customers have excellent taste, a high level of knowledge and like new and luxurious products. Magnolia is perfect for Korean consumers who seek tradition, trend and luxury, he said.

He said the bakery has already selected sites for its second and third stores. Currently, Magnolia has 20 stores across the world, including in Japan, Dubai and the United States It plans to open an additional 12 stores, including the Pangyo store, in Brazil and Moscow by the end of the year.