NPAD vows to boot out its bad reps

NPAD vows to boot out its bad reps 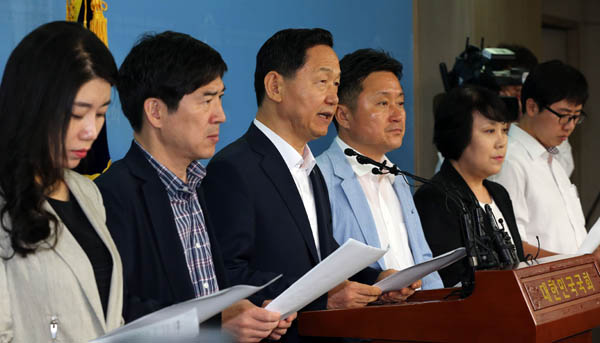 Kim Sang-kon, chief of the reform committee for the New Politics Alliance for Democracy, third from left, announces the committee’s decision to replace at least 20 percent of its lawmakers with new faces for the general election scheduled next April. By Kim Seong-ryong

The main opposition party unveiled an ambitious reform plan and vowed to replace at least 20 percent of its least popular lawmakers with new faces in the next general election, which is less than 10 months away.

A reform committee for the New Politics Alliance for Democracy led by Kim Sang-kon, a former Gyeonggi education chief, said on Wednesday it will not give nominations to lawmakers with bad reputations, denying them the chance to run for reelection under the party name.

Kim said during a press briefing at the National Assembly that the party will evaluate the performances of its 129 lawmakers based on a public opinion poll, contribution to party campaigns, delivery of campaign promises and parliamentary activities.

Representatives who rank in the bottom 20 percent will be denied nominations. Kim said the 20 percent replacement level could actually rise because the party will also exclude lawmakers with ethical issues, regardless of their parliamentary achievements.

“It is undeniable that the nomination process [of the NPAD] has so far represented the interests of particular factions [within the party],” said the somber-faced committee chief.

If the reform is really carried out, at least 25 NPAD lawmakers out of 129 will not be given party tickets.

“Those lawmakers who are only preoccupied with keeping their parliamentary seats will not get another chance,” the committee chief said.

Referring to the NPAD’s long-running factional infighting, the committee asked its politicians to refrain from damaging party unity by putting the interests of themselves and their faction ahead of the party.

“We demand that those who stand in the way of the party’s efforts for unity be banned from becoming members of the NPAD,” Kim said.

It remains to be seen if the committee’s goals will be implemented under the leadership of Moon Jae-in, who has been consistently challenged by party insiders.

A point to watch is whether representatives who oppose Moon’s leadership will accept the committee’s reforms and choose not to leave the party even if they are denied nominations for reelection.

Protests could also erupt over the evaluation process if lawmakers in the bottom 20 percent claim it benefitted Moon’s faction.