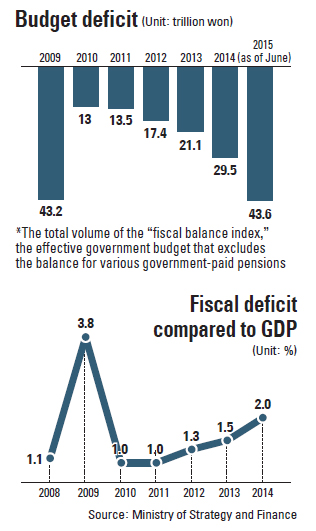 Korea’s fiscal deficit expanded to a new high of 43.6 trillion won ($36.7 million) in June due to the government’s early spending efforts to boost the sagging economy, government data showed on Thursday.

June’s deficit, compared to the previous month, was higher than the previous worst-ever deficit in 2009, which stood at 43.2 trillion won, according to the Ministry of Strategy and Finance.

Despite an increase in tax revenue, the “fiscal budget index,” a de facto budget balance excluding the government-paid pensions, jumped from 26.1 trillion in May, according to monthly data.

“Tax revenue was fairly good in June, but the widened deficit was mainly because of the government’s early spending of budget [items] to stimulate the economy,” said a Finance Ministry official by phone. “It is a bit less than the deficit in June 2014, when the index showed the highest-ever record, and the government also executed early expenditures to boost the economy.

In June 2014, when the government also committed itself to early spending to try to lift the economy in the aftermath of the Sewol ferry disaster, the effective fiscal deficit surpassed more than 43.6 trillion won, the highest-ever monthly record.

Compared to its gross domestic product, the fiscal deficit of Korea grew from 1.1 percent in 2008 to 2 percent in 2014, the ministry report said based on OECD data.

The deficit came despite the growth in tax revenue in June from a year earlier, the report said. Between January and June, tax revenue totaled 106.6 trillion won, rising 8.2 trillion won compared to the same months in 2014. The increase resulted from stronger rules in income tax reports and the revitalized real estate market, the report said, as well as a hike in corporate taxes.

Finance Minister Choi Kyung-hwan on Wednesday pledged to carry out “intensive fiscal reforms.” He also stressed the need to reduce some local governments’ projects funded by the central government.

“Last year, we had about 1,800 local government projects that were entirely funded by the central government’s money,” he said. “I’ll cut them by 10 percent and maintain the total number of those projects ... by removing a previous project if a new one is launched.”