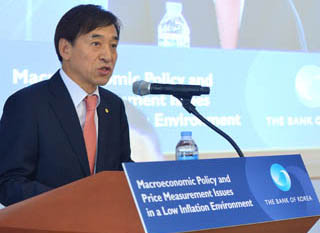 The Bank of Korea (BOK) and other central banks are facing a major challenge as low inflation has persisted in many economies due to drastic structural changes in the world economy, the governor of the Bank of Korea said on Thursday.

“The recent low inflation is attributable not only to cyclical supply and demand factors, but also to structural changes in the global economy,” said BOK governor Lee Ju-yeol, during his keynote speech at the Bank of Korea Research & Statistics International Conference in central Seoul.

The conference kicked off today.

“Structural factors such as population aging, innovations in product distributional channels and increased competition are working to diminish inflation pressures,” he added.

Lee said governments using inflation-targeting monetary policies need to look carefully at whether it was effective in tackling the issue and whether it was not creating side effects, noting even in the loose monetary policy environment, corporate investments have remained subdued, while the financial sector was more prone to risk-taking.

“In Korea for example, a series of policy rate cuts has been accompanied by rapid growth of household debt. So we are now closely looking at risks in the financial system due to the build-up of household debt, as well as at the macroeconomic risks, such as the shrinking of consumption capacity,” Lee said.

Lee stressed that accommodative monetary policy has its limits, adding that structural reforms were essential for sustained growth.

“It follows that central banks must analyze these ever-changing and complex economic conditions accurately and take appropriate countermeasures in responding to them correctly.”