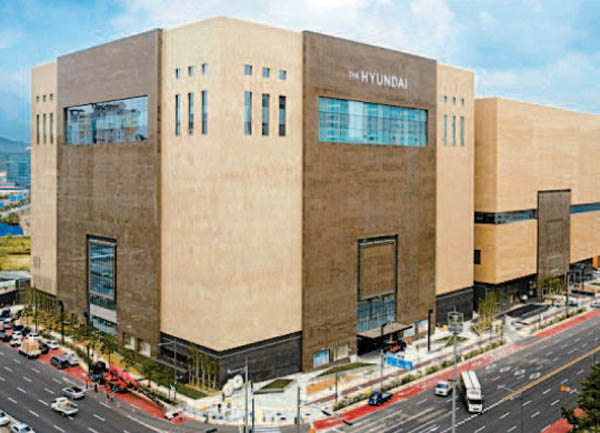 Rendering of the Hyundai Department Store in Pangyo, Gyeonggi, that will officially open to the public today. Provided by the company

The opening of the branch in Pangyo-dong put Hyundai Department Store in direct competition with AK Plaza, Lotte Department Store and Shinsegae, all of which operate in Korea’s most populous province.

Encompassing newly developed districts like Bundang, the city of Seongnam is home to major game companies like Nexon and NCSoft, as well as over 900,000 residents.

But Hyundai believes that the Pangyo branch can absorb people living in other cities in the region - like Yongin, Anyang and Suwon - with its massive size, emphasis on food and diverse facilities for children. 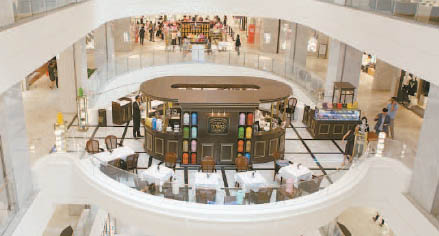 Stores getting ready for the opening of the department store. Provided by the company

Hyundai’s ambitions for the new store is reflected in its investment and sales targets.

The retailer invested a total of 920 billion won ($772 million) to build the new complex.

Hyundai held a preopening event for the public and media Thursday, though the official opening is slated for today.

The head emphasized the geographic advantage of Pangyo, home to one of the country’s tech clusters.

“In Pangyo’s Techno Valley, there are 203 companies and the number of employees living there totals 80,000,” Kim said.

Hyundai’s 10-story shopping complex with six underground levels appears to have a competitive edge with its size.

Hyundai said that the Pangyo store is 2.4 times bigger than AK Plaza in Bundang and three times the size of the Bundang branch of Lotte Department Store.

The Pangyo store will bring together some 900 brands to the complex, including 83 luxury designer labels such as Louis Vuitton, Prada and Salvatore Ferragamo.

The new store will likely pose the biggest threat to AK Plaza by Aekyung Group, since it is the nearest department store - only 3 kilometers away.

Louis Vuitton closed its shop in AK Plaza to move into the Hyundai Department Store.

Other than its size, the highlight of the new Hyundai Department Store lies in its food section, which is the largest among local department stores.

Most notably, it features exotic grocery and food chains.

The store represents a unique blend of sandwich stalls, grocery stands and restaurants.

There, food products made on the premises are both for sale to the public and used to supply restaurants inside the marketplace.

The brand has been well-received worldwide, but this is its first entrance into Korea.