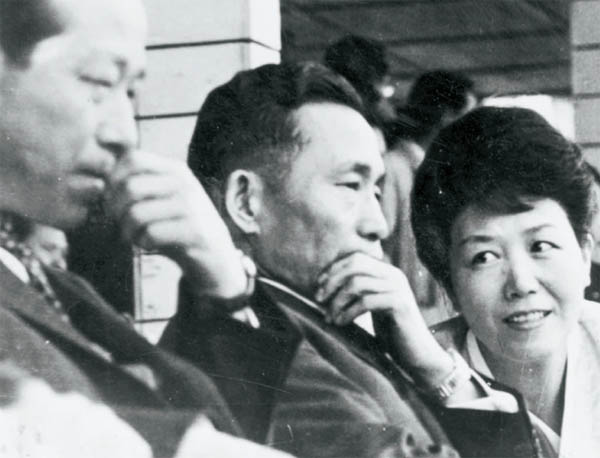 First lady, Yuk Young-soo, right, speaks with President Park Chung Hee during a presidential campaign event on April 25, 1967, at Chuncheon Public Stadium. Kim Jong-pil is pictured left. Yuk was popular among the public. During one campaign stop in Daejeon, President Park had to pause his remarks for three minutes after crowd members spotted the first lady and started requesting her autograph. “I think I should report my wife for interrupting the campaign,” Park once joked. [JoongAng photo]

Even in the scorching heat, nearly two million people gathered along the road from the funeral venue in front of the General Government Building to the National Cemetery to see the first lady’s final moments.

Women in white mourning clothes and the elderly, many with symbolic ribbons on their chests, sobbed along the way.

President Park Chung Hee said his last goodbyes to his wife at the main gate of the Blue House, the photograph of him patting the chrysanthemum-covered hearse touching the hearts of millions. 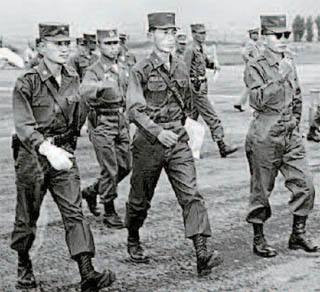 Park Chung Hee, the deputy chairman of the Supreme Council for National Reconstruction, attends a graduation ceremony at Army Staff College in Jinhae, South Gyeongsang. With him, from left, is Maj. Park Chong-kyu and Capt. Cha ji-cheol, part of his bodyguard team, and his secretary, Capt. Son Yeong-gil. [National Archives of Korea]

Taking responsibility for the assassination of Yuk, Presidential Chief Security Officer Park Chong-kyu resigned. It was the end of an era for “Pistol Park,” as he was known, who had stood by Park Chung Hee for 13 years since the May 16 revolution in 1961.

I first met Park Chong-kyu in June 1949, when I graduated from the Korea Military Academy (KMA) and was assigned to the combat information department of the Army Headquarters. Park Chung Hee was also working at the intelligence unit.

On my second day on the job, I heard a sergeant first class reading a book aloud in English.

“This is a map. That is a desk. Spring has come. The ice and snow have melted away,” the sergeant read.

Intrigued, I asked, “What is your name, sergeant?”

“You must be studying English very hard,” I said.

He laughed and replied, “Do I look like I’m studying hard? I’m reading a middle school textbook because people keep telling me that knowing English will be helpful in the future.”

I liked his energy.

Once the [1950-53] Korean War broke out, the Army Headquarters moved to Busan and the Army General Service School was established to quickly train military officers.

“This war will go on for a few years, so you should become an officer,” I told Park Chong-kyu, who was then a master sergeant. “You won’t do a thing as a sergeant. Enter the general service school.”

“An officer? I don’t want to be an officer. This war will end soon enough,” he said.

I practically dragged him to the school. He obeyed me in the end, but he was still a loose cannon.

Shortly after, I brought Captain Park into the administration department of the Army Headquarters, when he abruptly jumped into the well at my house over his personal troubles. My wife, Park Young-ok, called to tell me, and when I got home, I found him hanging inside the well, splitting his legs on either side.

“Do you want me to save you or do you want to drown down there?” I asked.

He begged to get out.

“How can you jump down the well and now beg me to save you?”

Nevertheless, I got a net down to pull him out.

A while after that incident, Park went missing.

The Defense Security Command eventually found him in Jeju Island and he was taken back to Seoul.

“What were you doing in Jeju?” I asked.

His answer was unexpected. “I tried to stow away to Japan.”

I wielded my influence for his personnel affairs a few times. When he wanted to go to the frontlines, I looked for a position. When he wanted to work with American forces to practice his English, I sent him as a liaison officer to the U.S. base in Gyeonggi.

At the time, he often talked nonsense to others.

“I only follow Maj. Gen. Park Chung Hee and Lt. Col. Kim Jong-pil,” he said. “I care nothing about the others.”

During the May 16 revolution in 1961, Park’s job was to arrest Prime Minister Chang Myon, so he opened a field investigation on the eighth floor of Bando Hotel, where Chang stayed.

On the day of the revolution, he led a failed raid on the hotel with six of his men, but Chang had already left 10 minutes prior. Angered, they fired their guns into the air. At the same time, I was printing our revolutionary declaration at a nearby shop, and I assumed there had been a gunfight at the hotel.

However, he couldn’t break his bad habits when drinking.

Sometimes, he would shout, “I’m going to kick Park Chung Hee’s ass!” And each time, he was knelt on the stairway of the Blue House in the early morning as he sobered up.

“Either behave yourself or don’t drink,” President Park would tell him, as if talking to a friend.

Park Chong-kyu had tremendous power as the president’s right-hand man. Even Lee Hu-rak, director of the Korean Central Intelligence Agency (KCIA), didn’t dare to say a word to him.

His nickname became Pistol Park because he had a habit of pulling out his gun whenever he got angry.

But with vested authority, he became a completely different man. He used to follow me around, but eventually forgot about our relationship, probably because he didn’t have to lean on me anymore. It made me realize how quickly society can change people’s minds.

There is a Japanese saying that goes: “If you look at a person, treat him like a thief first.”

When Park Chong-kyu was dismissed after Yuk’s death, Park Chung Hee asked, “Who should be the next presidential chief security officer?”

I recommended Oh Jeong-geun. He was a Marine and headed the tank battalion during the May 16 revolution. I thought he was a man of justice and principle.

After being discharged from the military in 1963 as a brigadier general in the Marines, Oh served as a lawmaker. The president agreed, having already considered him a viable candidate and informed Oh to prepare for the position.

The next morning, Park asked me to come to the Blue House.

The decision surprised me.

I paused and wondered who could have recommended him.

Park’s son-in-law, Han Byung-ki, a former diplomat, had apparently recommended Cha, but it wasn’t he who told the real truth.

The late first lady had recommended him, in fact.

Before her death, she once asked Park Chung Hee, “Why don’t you work with a proper man like Cha Ji-cheol?” - a man known as a sincere Christian and a devoted son to his parents.

She must have believed Cha could prevent unnecessary political scandals in her husband’s administration.

So after our talk and a night sleeping alone, the president had changed his mind. Naming Cha as the next presidential chief security officer was Yuk’s posthumous work.

After failing the admissions test for the KMA in 1953, Cha became an artillery cadet. He joined the May 16 revolution as a captain and was a member of Park Chong-kyu’s team tasked with arresting Prime Minister Chang Myon.

He then served on Park Chung Hee’s bodyguard team after the revolution. Since there weren’t many in the group, the president knew Cha’s face.

In 1963, Cha was elected as a lawmaker in the sixth National Assembly and served two more terms. While working in the legislature, he earned a doctoral degree and published a book, though some suspected he didn’t actually write it himself.

In 1969, he became the youngest chairman of the Foreign Affairs Committee. After he was appointed, he used to don a fedora and shoes with higher heels, like an English gentleman. But it looked ridiculous.

Yuk’s death unexpectedly changed the official power structure. Cha’s rise was meteoric, and in the last years of Park’s presidency, questionable candidates made their way into his inner circle.

There can be no assumptions in history, but if he had named Oh as his new presidential chief security officer, Park and Cha may never have been assassinated on Oct. 26, 1979.

The irony is tragic.