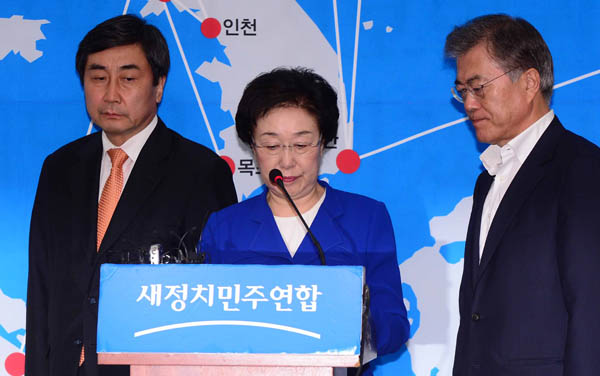 Han Myeong-sook, center, former prime minister for the Roh Moo-hyun administration, stands in the chairman’s office of the New Politics Alliance for Democracy in the National Assembly to announce her reaction to the Supreme Court’s ruling against her Thursday.[NEWSIS]

South Korea’s top court upheld a lower court ruling that found Rep. Han Myeong-sook of the New Politics Alliance for Democracy (NPAD) guilty of accepting 880 million won ($740,000) in bribes while serving as prime minister and sentenced her to two years in prison.

The Supreme Court’s decision to convict Han of receiving illicit funds from a construction company owner came five years after her legal battle began and deals a blow not only to the former prime minister’s political career but also to the NAPD, which was led by Han three years ago.

In an 8-5 ruling, the highest court ruled that Han took 880 million won from Han Man-ho, who led a local construction company, during three occasions in 2007 when she was the second most powerful person in the country, saying the evidence cited by an appellate court guilty verdict was valid.

Han was stripped of her parliamentary seat upon the verdict’s release.

“All verbal testimonies given by Han Man-ho in a lower court are valid. In consideration of all evidence, a guilty verdict [against Han] is neither against legal principles nor runs the risk of being flawed,” the majority opinion said.

One of the issues contested in the five-year legal battle was whether to accept the validity of testimony given by the businessman accused of bribing Han. While questioned by prosecutors before his trial, he said he had bribed Han in return for business favors. But at the first trial, he changed his story and said he didn’t. The first trial found Han not guilty in 2011.

The Supreme Court’s ruling Thursday came two years after the case was referred to it. Its long deliberations prompted suspicions that the judicial branch was calculating the potential fallout from its final judgment on the case.

In what was seen as a cautious approach by the judiciary branch, a panel at the top court ordered deliberations that would involve all 13 Supreme Court justices.

The former prime minister said that while she respected the verdict, she could not accept it, calling it a “political persecution.” She likened it to an investigation of former President Roh Moo-hyun, who committed suicide in the middle of it in 2009. Han was Roh’s prime minister.

“A law that should be impartial has fallen victim to power,” Han said in a statement released after the verdict, adding she had lived the past six years as the target of a politically motivated investigation.

In a dramatic fall from grace, the 71-year-old politician now faces a two-year imprisonment and the effective end of her political career. Han will be barred from running for elected office for 10 years after completing her two-year term.

Han will be Korea’s first former prime minister to be imprisoned. Han is expected to enter prison in the coming days.

Han was well-known for her work with civic groups during the struggle for democracy against the dictatorship in the 1970s.

She was sentenced to a 30-month jail term in 1979 on charges of violating anti-Communism laws, a charge that was used by the authoritarian government to clamp down on dissent.

Entering politics in 2000, Han got on the fast track to become the country’s first female prime minister in 2007 for Roh’s government and became chairwoman of the opposition in 2012.

The NPAD appeared devastated by the ruling, with its chairman, Moon Jae-in, expressing not only deep regret but also a sense of distrust in the judicial system.

“I can’t refrain from expressing my grave concern that the court has been politicized,” the former presidential candidate said after the ruling.

The ruling Saenuri Party welcomed the verdict, saying justice had prevailed and called on the NPAD to stop painting the judiciary as being politicized without valid grounds.

“It is just an excuse to call the ruling politically motivated when in fact, the judgement was delivered in accordance with laws and principles,” said Kim Young-woo, the Saenuri Party spokesman.