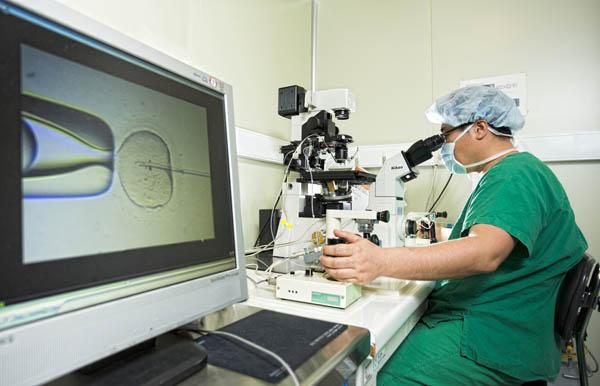 A passionate fashion designer, Kim Ji-yeon, 39, recalls spending most of her adult life in love with her career.

Her passion for work is so intense that dating never really seemed to be a top priority. She’s currently single.

But Kim, who wished to use a pseudonym, never gave up on her dream to one day meet her Prince Charming, get married and start a family. Having a child was always in her vision for the future.

“By the time I reached my mid-30s, I became anxious about pregnancy, that I might end up infertile when I get married at an older age,” said Kim. “I thought I might as well store my eggs at an egg bank while I’m young and healthy.” 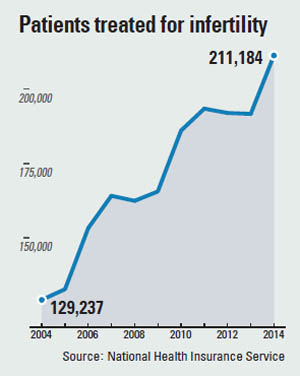 In a country where women’s presence in the work force has increased over the past few decades and the average marrying age has risen accordingly, doctors here say that more people concerned about infertility later in their lives are taking preemptive action, mainly by freezing their eggs in advance.

With studies indicating that the ability to reproduce becomes more vulnerable with age for women than men, most choosing to act are female.

Ovarian function is most active at 25, continues to fall afterward and drastically drops after 34.

“Over the past three years, we’ve frequently received calls from women in their late 30s and early 40s,” said Kim Na-yeong, who works in the maternity ward at Miz Medi Hopsital. “For patients under the age of 30, more than 70 percent of external fertilization surgeries are successful. That rate, however, falls to about 50 percent after 31, and below 30 percent after 37.”

“If you store your eggs at an early age and undergo surgery years later, your success rate will be similar to if you had had the same procedure done at the time you extracted your eggs,” Kim added.

One woman who says she found hope through egg storing was a 36-year-old woman surnamed Ahn, who wished to go only by her surname.

Ahn was diagnosed with chronic myelogenous leukemia at 22, and was told she had to receive total body irradiation, a form of radiotherapy done in preparation for a bone marrow transplant.

One critical side effect was that she may never get pregnant.

Ahn decided to freeze her eggs, a process that requires extracting the eggs and then quick-freezing it at temperatures 210 to 196 degrees Celsius below zero (346 to 320.8 degrees Fahrenheit below zero) using liquid nitrogen.

Ahn fully recovered five years later and married in 2009. But a year of unsuccessful attempts trying to get pregnant prompted her to go to the hospital to find the eggs she stored years ago.

Five out of seven were healthy, and a successful artificial insemination presented her with a healthy son in July 2011.

“Two to three eggs might get damaged while refrigerated, which is why patients normally extract seven to 10 eggs,” said Yoo Sang-wu, a professor at the Department of Obstetrics and Gynecology at CHA Gangnam Medical Center.

Yoo added that a patient can normally receive two external fertilization surgeries after eggs have been frozen for at least 10 months.

Park Chan-woo, an obstetrics and gynecology professor at Cheil Medical Center, said freezing one’s eggs has also helped cancer patients find hope that they, too, can get pregnant, even if anticancer treatments undermine reproductive function.

“Cancer treatment in the past was focused on survival,” said Park, “but nowadays, it’s more about the quality of life after a person recovers.”