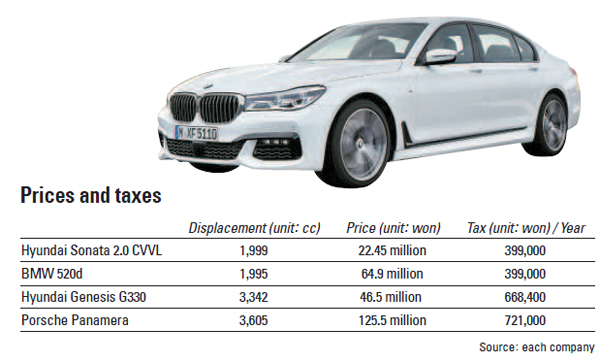 Owners of expensive imported cars could be heading for higher costs, with one lawmaker calling for vehicle taxes to be based on a car’s value, not on engine size.

Ruling Saenuri Party lawmaker Shim Jae-chul is planning to submit a bill next week to the National Assembly that revises current auto tax codes to determine the tax rate depending on each car’s price.

“Current automobile tax code, which is displacement-based, is not fair,” Shim wrote in a statement on Friday. “It’s more reasonable to determine the tax rate with the car’s price, reducing tax for low- to mid-priced models while expanding tax on high-end models.”

Shim pointed out that the existing automobile tax code doesn’t reflect technological advancements in the auto industry. The current tax code was compiled about 50 years ago.

Owners of high-end cars like regular hybrid and more-advanced plug-in hybrid electric vehicles (PHEV) - with more advanced engines - are paying less auto tax, he said, just because those models are designed with smaller displacement to burn less fuel, or because there is no tax category for electric cars.

The BMW i3 is priced in the 60 million won range, but the existing tax code levies a minimum basic tax of 130,000 won because it doesn’t have an internal combustion engine and a number for engine displacement.

So far, owners of regular passenger cars with engines lower than 1,000 cc engine displacements must pay 80 won per cubic centimeter.

The revised tax code Shim wants, however, is designed to levy higher taxes on owners of more expensive cars. Owners of cars cheaper than 15 million won would pay 0.8 percent of the car’s price, and those priced higher than 15 million won would have to pay a base rate between 120,000 won and 330,000 won, and an additional tax based on the car’s price.

“The United States determines auto tax based on the car’s price, whereas European nations do so based on the amount of carbon emissions,” a representative of imported automakers said. “If the revision bill passes the National Assembly, it will become a new challenge for imported brands.”

According to data released by the Korea Automobile Importers and Distributors Association (Kaida), 140,539 imported cars were sold in Korea in the first seven months of this year, a 25.1 percent rise from a year earlier. Some 90.5 percent of imports sold in Korea were 3,000 cc or under during the same period.

The market share for foreign automakers in the country in the first half of this year hit an all-time high of 16.6 percent with sales of 119,832 units, a 27.1 percent rise from a year earlier.