A woman and a mannequin share the screen in bizarre film

A woman and a mannequin share the screen in bizarre film 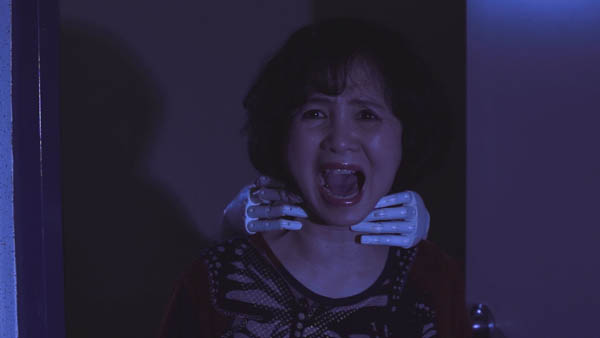 Actress Gu Yun-hee screams as a haunted plastic mannequin chokes her from behind in the highly buzzed-about horror movie “Scary,” directed by Yang Byoung-khan. Provided by the distributor

A film titled “Scary” is the talk of the town.

The extremely low-budget horror film directed by Yang Byoung-khan was supposed to be screened only one time at a theater on July 30, and then move to IPTV.

The only reason it was screened at a theater at all was in order to receive a premium label when distributed online.

But due to the unexpected fanfare, going furiously viral after the first screening, the film reopened a week later in both Seoul and Daegu. 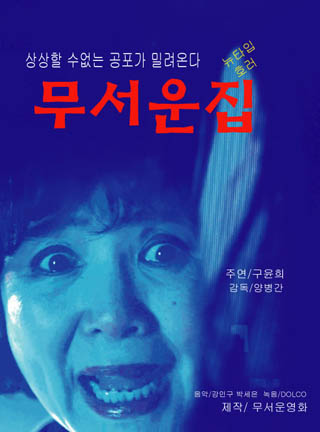 Two weeks have passed since its re-release, but the number of theaters showing the film keeps climbing, an almost unprecedented phenomenon in Korea.

The film’s explosive popularity has even led to special discussion sessions where the director answered questions on the film from the audience.

Director Lee Byoung-heon, who visited such an event, reportedly said that he has “become a fan of Yang.”

Despite the growing enthusiasm for the flick, looking at the poster, one cannot easily see what the fuss is about.

With a plain blue background, the layout and font are reminiscent of some cult film from the ’90s. The catchphrase, “An unimaginable horror awaits you,” could not be any tackier.

The film itself is even stranger.

Only one character appears in the film, played by former stage actress Gu Yun-hee. Director Yang makes a special appearance in the beginning as Gu’s husband, who leaves on a business trip.

Shot in a shaky manner, the camera follows the woman while she does laundry, fixes herself lunch and cleans the house.

At one point, she catches a glimpse of a plastic, long-haired mannequin, which resides in the basement of the house and it gives her the creeps.

Her very awkward monologues break the silence once in a while, but for most of the time the audience has to watch her wandering about in the house in silence.

In the latter part of the film, darkness falls and she goes to sleep, when the real “horror” begins.

As the eerie music indicates mounting tension, the stiff, haunted mannequin appears before her more frequently. She becomes furious at the object for disturbing her sound sleep, attacking it with an unidentified wooden stick and a kitchen knife.

When she gets bored waiting for the ghost to appear again, she amuses herself by abruptly dancing to “Besame Mucho.” Extremely weird, but it sure does provoke laughs from the viewers.

To the very end - to the point where credits roll, indicating that the majority of the work, from acting, screenwriting, directing, lighting and even editing, was done by Yang - the B-rated, absurd concept doesn’t subside.

“[We] never expected the film to do so well,” said Kim Tae-ho, CEO of film distributor Contents Wing.

“I was endlessly in doubt until the day I first watched the film at a theater,” he said. “But, watching its trailer, I just thought that it would at least stand out among others.”

“Its director Yang told me that he initiated the film based on wanting to make the audience stay in their seats until the ending credits roll,” he explained.

“Although we have become a sensation, only about 400 viewers have seen it so far. There is no great meaning to it, except that we hope the film will show others that they all can be filmmakers without any special talent and equipment,” Kim added.

The film is currently screening at Joy N Cinema in Sinsa-dong, southern Seoul, and Miro Space in Jongno District, central Seoul. From Monday, the film is scheduled to be screened at Sponge House near Gwanghwamun as well.