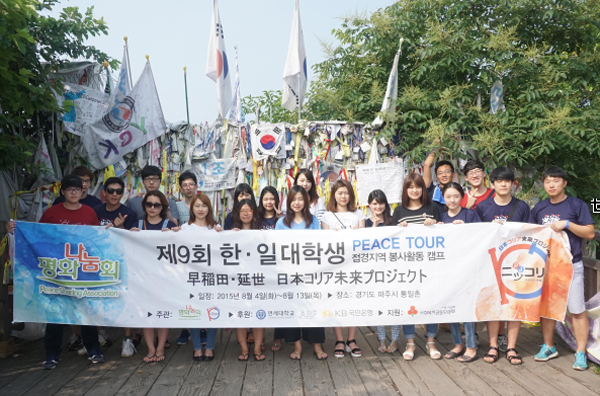 Students from South Korea and Japan got a new perspective on peace after staying in the Korean Peninsula’s demilitarized zone (DMZ) for about a week earlier this month.

In the 9th Korea-Japan University Student Peace Tour, held from Aug. 4 to 13 in the northernmost village of Tongil-chon in Paju, Gyeonggi, participants had the opportunity to reflect on issues regarding peace and land mines.

Kim Baek-sang, 27, who attends Yonsei University, said that in meeting with land mine victims through the event, he realized the extent to which the explosives still affected people’s lives, even decades after the 1950-53 Korean War.

“I learned that the peace we can see is not the only thing we have,” he said.

Since 2007, the Peace Sharing Association (PSA), the Korean branch of the International Campaign to Ban Landmines, and Nikkori, a student organization of volunteer activities at Waseda University, have held events in villages inside the DMZ.

The event formerly only involved students from Yonsei University and Waseda University in Japan, but since last year has allowed other South Korean university students to participate. This year, 21 students took part.

According to Kim Nan-kyung, general secretary of the PSA, the event is intended not only to allow young people to meet and interact with land mine victims, but to approach peace from a more realistic perspective.

Young people, she said, often view peace in an abstract way, but can gain something more tangible by visiting a place like the DMZ, where the potential for war is always present.

“The DMZ is completely different from other areas [in the country],” Kim added.

Waseda University student Maika Kumasako, 19, who also attended the 10-day event, said she participated for a similar reason - to actually see the 38th parallel, the borderline area between the two Koreas.

“In Japan, there are no opportunities to think about war,” she said. “But I believed that if I could see the 38th parallel, I could learn more about war-related issues.”

Land mine issues were also unfamiliar to the 19-year-old.

“I didn’t even know that land mines were buried in the DMZ, and I didn’t even seriously think about it,” she said.

According to the PSA, land mine accidents have been reported each year since the 1950-53 Korean War. From 2010 to 2014, nine cases were reported.

The tour included a long itinerary. Students took part in a summer school program and volunteered in the village. They also visited places relevant to inter-Korean relations and the Japanese colonial era (1910-1945), such as Seodaemun Prison in Seoul, the Third Infiltration Tunnel in Paju and the Joint Security Area (JSA).

Yang So-hye, 21, a Korea-Japanese exchange student at Yonsei University from Kyoto, has visited the JSA through both North and South Korea. She went earlier while attending a high school operated by the General Association of Korean Residents in Japan, or Chongryon, a pro-Pyongyang organization with strong ties to North Korea.

“I got a totally different impression [from both sides],” Yang said.

She added that while touring the area from the Northern side, she got the impression that the peninsula’s division had been caused by the United States, though the impression given during the event was different.

Participants also got the chance to discuss different topics each day, like political issues or territorial disputes.

Kumasako said she could see how Japan’s former rule over Korea had influenced the dispute over the Dokdo islets in the East Sea, which Tokyo also claims and calls Takeshima.