News initiative aims to be outlet for young voices

News initiative aims to be outlet for young voices 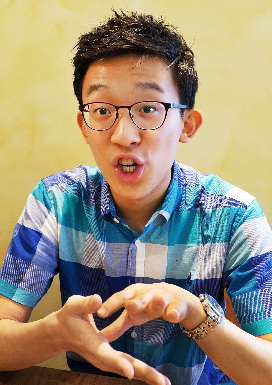 Our contemporaries are living in the era flooded by mass media both online and offline, but rarely are official publications dedicated to young people, with most delivering the content of interest to the older generation.

That, at least, was the idea behind The Young Post (TYP), an independent news and analysis initiative conceived by eight students from across the globe who met at the Young Global Scholars Program at Yale University last summer.

The project is based on the notion that a young voice is just as important to society as any other. Its website is set to launch Sept. 1.

South Korean Park Jae-hyun is among the team. Starting as a TYP co-founder, he was recently promoted as its Eastern executive editor, a position that includes supervising and streamlining work from all bureaus east of the prime meridian.

Park holds one of the second-highest positions, with Western Executive Editor Peter Russell, in TYP’s hierarchy, under Editor-in-Chief Aditya Karkera.

When he met with the Korea JoongAng Daily on Aug. 5, he was excited about the project’s launch.

“Whenever I embark on a new project, I get chills,” Park said. “I worked day and night recruiting people from school and elsewhere.”

“My parents would tell me, ‘You got into Harvard, give yourself a break.’ Then I’d respond, ‘But it’s just the beginning.’

Park was accepted early to Harvard University this year and begins his first semester next month.

He believes TYP, which claims to be an unprecedented publication representing youth, has something special compared to existing media platforms.

“Youth journalism still remains a relatively intact, underdeveloped market sector, which means it’s full of potential,” Park said. “We want to take the youth journalism scene by storm - by focusing on reliability, maturity and factuality - when most other [types focus] on corny and insignificant topics.”

Youth publications may sound unorganized or too focused on entertainment, but the 19-year-old co-founder adamantly argues that it shouldn’t be viewed that way.

“In light of many unsuccessful youth initiatives, The Young Post must strive to be different,” he said. “We will inform our readerships, not entertain; we will generate a healthy discourse, not petty gossip and glorification of the humdrum. Unlike many other newspapers, we will aim to provide a user-centric experience, eliminating all obstacles to information such as paywalls and advertisements.”

“Whether they are political activists, accomplished musicians, or app developers, I want to provide these bright minds with the spotlight that they deserve,” he said.

It wasn’t easy for the eight founding editors to establish a new publication and there were a few setbacks. The launch date, for example, has been delayed a few times, which caused some frustration among the writers, and there has been internal disagreement, too.

The members had to stay up nights, sometimes for marathon discussions online.

But their endeavors have mostly been successful, and they’ve recruited over 120 writers from all over the world and secured pre-seed funding of $5,000 to $5,500 from a group of proven entrepreneurial investors in website development.

“As a leader of The Young Post, I would like to share a beautiful quote that has touched me personally lately and that fits into my values,” Park said.

“The late Korean journalist Ri Young-hee once said, ‘What I worship like religion - what I will fight to my death to defend - is not the country, not so-called patriotism, but the truth.’”