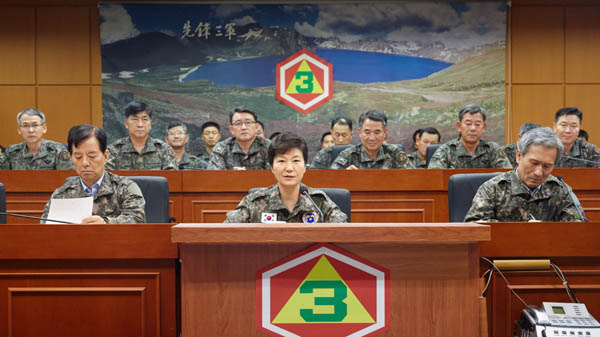 President Park Geun-hye, center, attends a video conference with Defense Minister Han Min-koo, left, and Presidential Security Advisor Kim Kwan-jin as she paid a visit to the 3rd Corps Headquarters on Friday. Her visit was to inspect military preparedness for the North’s provocations and to encourage the troops. [NEWSIS]

Tension between the two Koreas continued to ratchet up Friday as North Korean leader Kim Jong-un ordered his military to be prepared for a quasi-state of war and its forces to be fully equipped.

Kim has set a deadline of 5 p.m. Saturday for propaganda broadcasts to be stopped along the border. If they are not, he promised military action.

Tension started rising Thursday when the North fired an anti-aircraft shell into a hill in Yeoncheon, Gyeonggi, at 3:53 p.m. and then fired three rounds of 76.2mm artillery shells 700 meters (766 yards) south of the Military Demarcation Line (MDL) at 4:12 p.m. 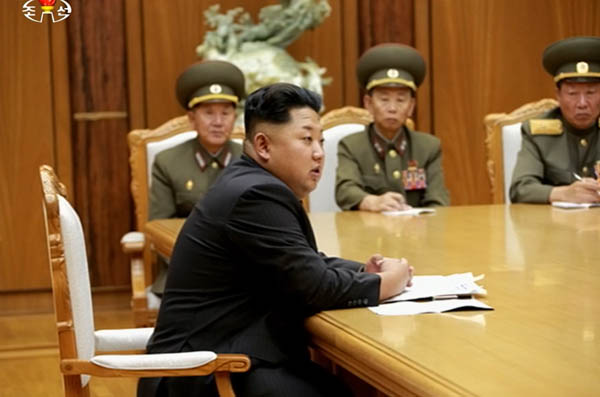 North Korean leader Kim Jong-un, front, convenes an emergency meeting of the Workers’ Party’s Central Military Committee on Thursday to declare a quasi-state of war. On Thursday, the North demanded propaganda broadcasts along the military demarcation line be stopped within 48 hours, saying it would attack the loudspeakers otherwise. Captured from Korean Central Television

South Korea’s military responded by shooting tens of rounds of 155mm artillery from 5:04 p.m. at a location around 500 meters north of the MDL.

Seoul believes Pyongyang is trying to distract attention from the land mine blasts on Aug. 4, which injured two South Korean patrol soldiers. After those blasts, Seoul resumed propaganda broadcasts along the demarcation line and the North has claimed that it is akin to a declaration of war.

The North’s official Korean Central News Agency (KCNA) on Friday reported that Kim convened an emergency meeting of the Workers’ Party’s Central Military Committee on Thursday to give directions to the Korean People’s Army.

“First Secretary Kim Jong-un of the Workers’ Party of Korea gave orders to frontline forces to get ready for immediate military operations and also declared a quasi-state of war as of 5 p.m. on Friday,” reported the state-run channel. “If [the South] does not stop the broadcasts, which are seen as psychological warfare, within 48 hours, the Korean People’s Army will take military actions to demolish the means of the psychological warfare.”

“North Korea is apparently preparing to launch SCUD missiles in Wonsan and Rodong Missiles in North Pyeongbuk Province,” a government official said Friday, “given that portable launchers have been spotted by joint surveillance assets of South Korea and the United States.”

“President Park’s visit to the field army is intended to inspect our military forces’ preparedness against the North’s provocations and encourage them,” said Blue House spokesman Min Kyung-wook. “There she was briefed by 3rd Corps Commander and other commanders of subordinate units about our military countermeasures and the situation of the North’s military forces.”

The joint military forces of South Korea and the United States raised their surveillance efforts after the shelling on Thursday.

The Korean Air Force increased the number of patrol drone flights and is operating an early warning aircraft E-737 24/7.

Also, military forces activated the joint plan to react to the North’s regional provocations, which stipulates that South Korean and U.S. forces jointly suppress provocations at the early stage.

“We’ve already activated the joint plan for regional provocations and we are jointly collecting and analyzing data about North Korean forces,” said a source in the military.

It is the first time the plan, which was agreed to by the two allies in 2013, was activated.

Another source said, “The 210th Fire Brigade of the U.S. in Dongducheon, Gyeonggi, is also ready for emergency support. This is proof that South Korea and the United States are taking the situation very seriously, and we will seek retribution to prevent any provocations.”

The Ministry of Unification sent a letter to the North saying the propaganda broadcasts are a righteous response to the planting of the land mines and the South will take stern measures against any provocation or threat. But the North refused to accept the letter. Seoul is planning to keep broadcasting along the border with loudspeakers.

The Unification Ministry restricted access to the Kaesong Industrial Complex as of Friday, only allowing people who enter and return on the same day.

“Since safety is our priority, we are prohibiting entrance of employees of subcontractors,” said ministry spokesman Jeong Joon-hee on Friday. “From this morning, entrance to the Kaesong Industrial Complex is limited unless employees of companies are entering and returning on the same day”

On Friday, about 10 employees of subcontractors were rejected when they tried to enter the complex. The Unification Ministry also did not rule out taking stronger measures.

The South Korean military expects a further provocation by Pyongyang possibly after 5 p.m. today, which is 48 hours after the North demanded the propaganda broadcasts be stopped.

Defense Minister Han was quoted by an official of the Ministry of National Defense as saying in a conference with major commanders: “There is possibility that the North will make provocations after 5 p.m. Saturday.”

“Minister Han is staying at the command and control center of the Joint Chiefs of Staff and Chairman Choi Yoon-hee is at an underground bunker in Seoul for Ulchi-Freedom Guardian exercises,” the official said.

“The North may fire artillery again and may provoke us in an ambiguous way so that we cannot make immediate responses. We are keeping an eye on North Korean military forces.”

Saenuri Party Chairman Kim Moo-sung on Friday held an emergency meeting with the party leadership, Vice Defense Minister Baek Seung-joo and members of the National Defense Committee and said, “We must be decisive to punish the North’s provocations, and the North’s regime must know that they can end this situation only by providing an apology and promising no more of these actions.”

“Pyongyang is trying to raise conflict among South Koreans by saying it is willing to solve the problem even after planting mines and firing artillery at us,” Kim continued. “The only way to stop them from dividing South Korea with groundless rumors and conspiracies is our firm resolution to cut the vicious cycle of the North.”

The NPAD held a meeting with National Defense Committee members as well.

“Provocations that undermine peace on the peninsula and threaten our people’s lives can’t be justified in any way,” said NPAD Chairman Moon Jae-in. “Violence always results in destruction. Our military and people won’t forgive it.”

The main opposition party also adopted a resolution that said, “Artillery attack is a clear military provocation, which violates the armistice agreement.”

Then Moon sent a letter to Presidential Security Advisor Kim Kwan-jin, which read, “It is exceptional that the North said it was willing to solve the problem and thaw the relationship. Let’s propose an unconditional high-level talk to the North.”

Moon also wrote, “We should open a retreat path for North Korea to prevent the situation from getting any worse. We’d better turn this crisis into an opportunity by holding them responsible for the provocation and come up with measures to prevent further provocations.”

The public seemed fed up with the North’s attacks.

“People living in border towns get really scared and worry about whether we should go to the shelters whenever the North provokes us,” said Choi Mi-ju, 37, a resident of Cheolwon, Gangwon, right next to the demarcation line. “I’ll believe they won’t do it again only when the South’s government takes strong action. They are demanding the propaganda broadcasts be stopped, but since they’ve attacked us first, we should never stop them.”

“The public becomes insensitive to the North’s frequent provocations, but the military shouldn’t,” he said. “We can stop them only when we give decisive responses, based on principles.”

“In the past, our guideline was not to respond to the North’s provocations,” said Kim Ju-hong, a professor of international relations at the University of Ulsan. “But this time, the military has taken the right reaction after the current government let them respond first and report later.

“The government should not submit to the 48-hour threat because they’ve been weak in the face of strong opponents,” he continued. “If the government tries to talk to them again, they will do the same in the future and that’s why the government must take stern action at any cost.”