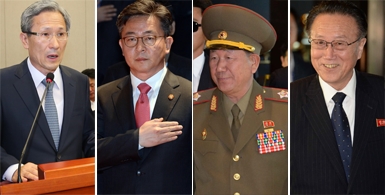 South and North Korea agreed to hold a high-level talk at the truce village of Panmunjom at 6 p.m. Saturday in an apparent effort to prevent ongoing tensions from escalating into a full-fledged military conflict.

Hwang, the director of the General Political Bureau of the North Korean Army, is considered to be the country’s second-most powerful man after leader Kim Jong-un.

Kim Yang-gon, secretary of the Central Committee of the Workers’ Party, is in charge of inter-Korean relations for the North.

“The talk’s agenda will include all ongoing inter-Korean matters,” said a Unification Ministry official, speaking on the condition of anonymity.

The South Korean military has stated it will remain at its highest alert level.

North Korea first proposed a one-on-one talk between Kim Yang-on and Kim Kwan-jin at around 4 p.m. on Friday, the Blue House said.

At 9 a.m. on Saturday, Pyongyang replied by proposing a four-member talk, which Seoul accepted.

The duo from the North met with Kim Kwan-jin 10 months ago, when they visited the South to attend the closing ceremony for the Incheon Asian Games on Oct. 4.