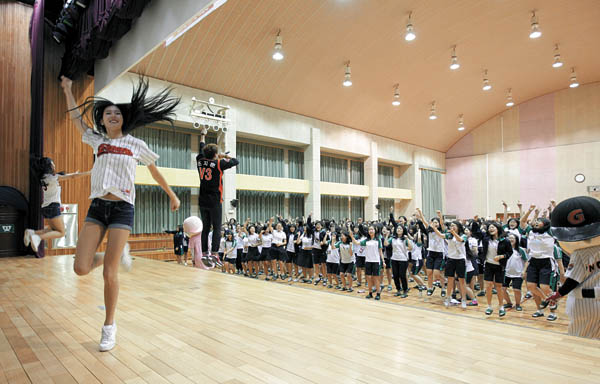 Drawing female fans to the baseball stadium has been a recent goal for Korea Baseball Organization (KBO) clubs, and the Lotte Giants’ latest strategy is to get women interested in baseball while they’re young.

Last Wednesday, the Giants hosted an event called “Exciting and Joyful Girls with Baseball” at JungAng Girls’ High School in Busan, which focused on introducing the sport to female students. This was the second women-focused event for the Giants. Last month, it held a similar event at Keumjeong Girls’ High School, also in Busan.

The reaction from freshmen at Jung
Ang Girls’ High School was better than expected. The students were focused on the presentation about the rules of baseballs, and when Giants officials showed defensive highlights, the students applauded loudly.

When they saw a clip of the Los Angeles Dodgers’ Ryu Hyun-jin pitching, the students cheered as though they were actually watching the national team. When a clip featuring notoriously handsome Giants infielder Kim Dae-ryuk rolled, students smiled as if watching a famous actor.

The girls said the programs were not only helpful in boosting their knowledge about baseball, but also delivered an exciting break from school life.

“I was a little sad that I can’t visit the baseball stadium these days because of school work, but it was really fun to experience baseball in this way,” said Kim Hye-bin, a freshman.

The baseball fever peaked when Giants cheerleaders appeared and gave a lesson in cheerleading. With the Giants’ music playing in the background, the students had fun imitating the cheerleaders’ dances and movements.

The program didn’t only improve the mood of the students.

“I’m actually leaving here with more energy,” said Cho Ji-hoon, who leads the Giants cheerleading squad. “I’m happy that this became opportunity to spread baseball, and I hope female students in Busan will pay more attention to the Giants.”

“Back when I was about the age of these students, I also didn’t know much about baseball,” said Park Ki-ryang, the star cheerleader for the Giants. “But it’s meaningful that I can participate in a program where students get rid of their stress and know more about baseball.”

The event also focused on school-related issues. The Giants invited crews from Yoon Hyung-bin Theater to perform a play about preventing violence in school.

“Since the event has been well-received by two schools in a row, we are planning to have the event even in the offseason,” said Kim Geon-tae, who works for the Giants’ marketing team.

Kim added that the Giants will prepare other programs in the future to expand the team’s fan base.