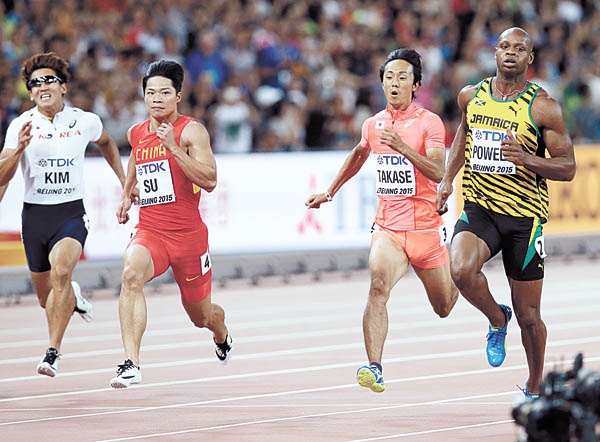 From left: Kim Kuk-young, China’s Su Bingtian, Japan’s Kei Takase and Jamaica’s Asafa Powell compete in the qualifying round of the men’s 100-meter during the World Athletics Championships on Saturday. [AP/NEWSIS]

BEIJING - Sprinter Kim Kuk-young caught the media’s attention last month for setting a new national record in the men’s 100-meter sprint, despite failing to place at the Gwangju Summer Universiade.

A member of Gwangju City’s track and field team, Kim clocked 10.16 seconds in the 100-meter semifinals at the universiade and qualified for the IAAF World Championships in Athletics that kicked off in Beijing over the weekend.

At the 2011 Worlds in Daegu, the 24-year-old participated in the 100-meter sprint in front of Korean fans but was disqualified after a false start.

In the 2013 Worlds in Moscow, he participated in the 400-meter relay event, though his desire to run the 100-meter remained.

On Saturday, Kim competed in the long awaited 100-meter sprint at the Worlds, but instead of feeling excited, he felt the pressure of a world-class stage.

In the men’s 100-meter group 1 qualifiers, Kim finished last among seven sprinters after clocking 10.48 seconds and failing to advance to the semifinals. Jamaican sprinter Asafa Powell was the group winner, with a time of 9.95, followed by China’s Su Bingtian at 10.03.

Kim had the fastest starting response time in his group at 0.117 seconds but was running fourth in the pack in the middle of the race. With his paced lagging, he finished at his worst time this year, 10.48 seconds - 0.32 seconds behind his personal best.

In an interview with Korean reporters on Saturday, Kim vowed to continue to improve.

Q. How do you feel after the race?

A. I don’t think you should blame yourself just because the results weren’t good. I feel that I took one more lesson from here, and I admit that there’s a big gap between me and other sprinters. Instead of thinking about winning, I should focus on reducing the gap between other competitors. Other Asian sprinters have gained experience by racing in international events. Good records come out in big events, so I will work harder.

You waited a long time to race in the 100-meter in the Worlds, but you didn’t get the results you were expecting. Are you disappointed?

I clocked 10.48 seconds, which was my worst performance this season. I regret that I got this record on a big stage like the World Athletics Championship, but I have to keep trying. I will put in my best effort from now on to get the record I want.

How was your physical condition?

I was in good condition coming into this event. I think I have to blame my lack of experience in big competitions instead of my physical condition. I have a ticket to the Summer Games next year. I will train focusing on big events. I’ll compete with sprinters who clock under 10 seconds, and as I chase their times and run with them, I will get better.

You ran with Jamaican sprinter Asafa Powell in the qualifiers. How did you feel?

He was fast (laughs). I tried not to think about him, but that was impossible. I won’t dwell on today’s race, just use it as a stepping stone to perform better next time.

Did you consider a new Korean record while running?

It would be a lie to say I didn’t. I received lot of attention after I set the Korean record in the Gwangju Summer Universiade last month. And to meet people’s expectations, I realized that the only way to do that is to work hard.

You have the fastest starting response time in your group at 0.117 seconds. What happened?

Response time isn’t important. What is important is that I was the last one to cross the finish line. The 100-meter sprint is an event for which I need to prepare more thoroughly.

There is a competition next month in Korea, and I want to try for a new Korean record in the men’s 200-meter. There are sporting events, like the National Sports Festival, that will also be held in Korea, so I’ll continue to work harder.