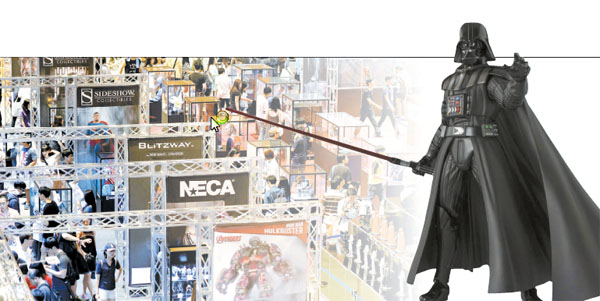 Youngsters and adults take a tour in the Seoul Kidult Fair held in COEX in Samseong-dong, southern Seoul, in July. Most figures were targeted at the mature market. [NEWSIS]

At first glance, the scene in the basement-level Electro Mart at the E-Mart outlet in Ilsan, Gyeonggi, may not have been unusual.

Children and their parents were milling around thousands of toy figures, depicting various characters and machines. But the figures, some valued at millions of won, were attracting more attention from adults.

“I came here with my six-year-old son right after work,” said one man who couldn’t take his eyes off an Iron Man figure on display.

Kim Heung-geuk, a director of home appliances at an E-Mart, said, “As the rumor that there is a toy store for people in their 30s and 40s spread throughout the nation, lots of people visit our store from far away.”

There were different entertainment elements at the store such as flying drones and mobile toys controlled by smartphones.

Adults with a liking for toys and figures are known as “kidults,” a combination of kids and adults. These aficionados are not considered a social minority anymore as the number of grown-ups who love collecting toys is rapidly increasing.

“Even about four to five years ago, when I told others that my hobby is collecting toy figures, people would treat me like a weirdo,” said a kidult who operates a toy figure club. “But now, even celebrities such as famous chef Choi Hyun-suk and YG Entertainment CEO Yang Hyun-suk proudly identify themselves as kidults.

“I think revealing such a hobby becomes the symbol of coolness,” he said.

“Only kidults can afford to buy drones and toy figures since they are too expensive for children,” said a staff member working at E-Mart’s Electro Mart.

Stores with signs identifying “Adult Only” toy areas in Apgujeong, Gangnam District, southern Seoul, and on the streets of Hongdae, western Seoul, are thriving with adult customers.

And toy exhibitions for the mature aficionado are also becoming popular among kidults.

The four-day Kidult & Hobby Expo, an event showcasing toys for adults and game-based products, was held on Aug.13 at BEXCO.

According to KT Economics & Management Research Center, the annual market for kidult products is estimated at 500 billion won, and it is expected to grow by 20 to 30 percent every year.

According to Gmarket data compiled by the end of July, sales of kidult products increased by 42 percent compared to the previous year, leveraged by wireless toys such as drones, aircraft and model helicopters, where sales have skyrocketed 157 percent.

Following the market trend of targeting this growing kidult generation, industries have begun producing products to entice them.

Samsung Electronics and Marvel Studios cooperated to produce only 1,600 of the limited edition smartphones.

The retail price was only 1,199,000 won, but the record-high price in the auction went up to 568,788 yuan, an amount equivalent to 102.3 million won, and Samsung Electronics successfully positioned itself at the center of global attention. The price of the smartphone tripled on the domestic second-hand market.

When Marvel Studios’ “Avengers: Age of Ultron” was released, about 800,000 various joint products, such as phone cases and tumblers using the main characters from the movie, were sold.

While the synergy effect is recognized among confectionary businesses, Sam Lip General Foods also jumped into a joint business with DaumKakao to produce Kakao Friends bread, whose wrappers have images of seven different characters from KakaoTalk.

“From the start, we planned to expand our target consumers from teenagers to larger groups in their 20s and 30s, matching the supply of the mass production bread market,” said Son Hyun-gil, an assistant manager from Sam Gil.

The company’s products, such as the dessert confectionaries and the cute characters, are well suited to female consumers in their 20s and it resulted in a return. The company sold about 38 million products for the year as of June.

“The character stickers inside the Kakao Friends bread are so adorable,” said Chun Da-hae, 24. “My friends even buy this confectionary solely for sticker-collecting purposes.”

According to the company’s consumer analysis, their major consumers shifted from teenagers to female consumers in their 20s and 30s

“Since kidult marketing is becoming global, our business also expanded to put characters from the movie “Minions” on our baked goods’ wrappers, and we are still in the process of seeking famous characters that consumers would like,” added Son.

Universal Studios and Illumination Entertainment’s movie “Minions” was a $100,000,000 success, making it the second-biggest hit after “Shrek 3” in 2007.

The thumb-sized yellow critter with one eye enticed young couples as well. The movie reached an audience of 1.3 million within a week locally.

With its huge success on screen, “Minions” products were also a big hit. The movie theater chain CGV released a “Minions’ combo,” a tray with a Minion toy figure on top of a beverage cup, and McDonald’s had a profitable time with its “Minion Happy Meal Set.”

“I came to buy my girlfriend one of them since there are only 100 Minion Happy Meal Sets available and it’s first-come, first-served,” said a man in his 20s.

“Inside Out” by Pixar Animation Studios, was also a huge success as the movie brings up adults’ emotions of when they were children. The movie reached an audience of four million within 25 days after its debut, appealing to families and also adults.

What makes adults fanatical about toys? Experts say the hobby and toy stores stimulate adults’ inner nostalgia for childhood experiences, making it a healing tool for workers who are under a lot stress everyday.

“The tendency to become kidults mostly occurs in people in their 30s
or 40s,” said Guak Geum-Ju, a
psychology professor at Seoul National University.

“This generation used to live in the cultural background filled with toys, and their behavior of buying such toys brings back the comfort they felt when they were children.”