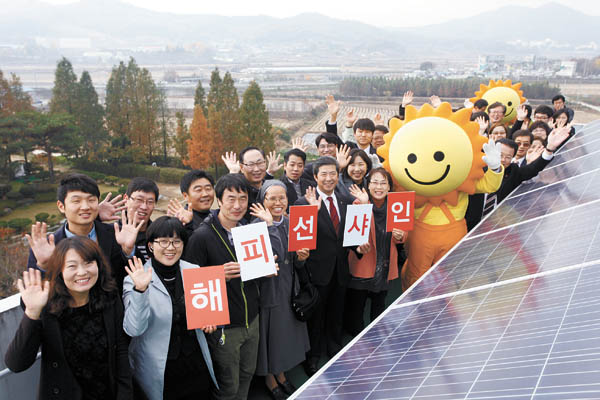 Hanwha workers smile next to a solar power system built at a welfare center in Asan, South Chungcheong, as part of its Happy Sunshine Campaign to help provide energy-efficient electricity to underdeveloped schools or welfare centers. Provided by the company

Hanwha Group started off as an explosives manufacturer when it was established in 1952, but now its business encompasses finance, defense, solar power and retail.

Chairman Kim Seung-youn and high-ranking executives have sought to inject the corporate value of “trust and loyalty” by pursuing charity activities and donations.

Instead of giving away money, though, the group opts to combine its technology and expertise with corporate social responsibility initiatives.

Among the signature initiatives is a campaign called Happy Sunshine. The program is devoted to installing solar power generators in underdeveloped areas or rural regions. 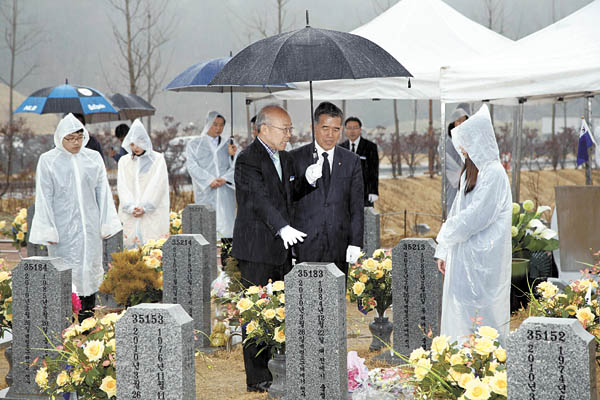 Hanwha Group held a commemoration event to mark the fifth anniversary of the sinking of the Cheonan warship in March at Daejeon National Cemetery where the 46 killed seamen are buried. Provided by the company

Since 2011, Hanwha has installed photovoltaic power generators producing 807 kilowatt-hours of power to 118 welfare centers in cooperation with World Vision. The group started offering maintenance services for the facilities in 2014.

And the group hasn’t confined its activities to only local projects. Hanwha Group and Hanwha SolarOne announced in 2014 that they will donate a 30 kilowatt-hour solar power system to Xiegou Town Center Primary School in Datong County, Qinghai Province.

The project was part of a partnership between Hanwha SolarOne and the China Youth Development Foundation. It was aimed at providing electricity to the local school as well as promoting the value of sustainable
development.

Along with the Hanwha Group, Hanwha SolarOne will be responsible for manufacturing and installing a 30 kilowatt-hour rooftop photovoltaic system tailored for the school.

The solar power company will provide the school with operational and maintenance-related training. It is estimated to yield 54,000 kilowatt-hours of solar energy every year for the school. This is Hanwha’s second project with schools in China. In 2013 the group donated a 30 kilowatt-hour rooftop solar power system to the Hope Primary School in Wufeng County, Hubei Province.

Hanwha has a group of staff that matches different social and charity activities with employees across 70 offices and assembly lines in Korea.

The business group said the participation rate is 90 percent and more than 95 percent of workers participated in annual donation programs.

The chairman emphasized that the loyalty in the group vision also involves sharing the pains faced by the country.

Hanwha hired members of the bereaved families of the sailors who died aboard the Cheonan warship in 2010. The South Korean Navy patrol boat sank near the inter-Korean border in the Yellow Sea on March 26, killing 46 seamen.

Chairman Kim said, “We should ponder what we can do for the bereaved families.”

Among many affiliates, Hanwha Corp. which produces propulsion components for missiles and various weapons, hired some of the wives, children or siblings of those lost in the disaster.

Hanwha said in 2010 that it will match the relatives’ ages and work experience to suitable positions.

This year, Hanwha Group held a commemoration ceremony to mark the fifth anniversary of the sinking of the Cheonan in March at Daejeon National Cemetery, where the 46 seamen are buried.

Relatives of the bereaved who now work at the group and company executives attended the ceremony.

During the event, a letter from the chairman was read by Shim Kyung-seob, CEO and president of Hanwha Corporation, at the event.

“I would like to offer condolences on behalf of Hanwha Group members,” he read. “Hanwha is a company that has its roots in the defense industry. Therefore, I believe that the company has a special connection [with the incident and the bereaved families].”

Outside of the charity work, the chairman also sought to build trust as the company does business.

One of the achievements from a trust-based relationship was the Bismayah New City project in Iraq.

Hanwha E&C, a construction unit of Hanwha, received a construction order worth $2.1 billion from the Iraqi government in May to build basic infrastructure like schools, hospitals, gas stations and bus terminals in the Bismayah New City project.

Since 2012, Hanwha has been signing contracts to design and build Bismayah New City, on an area of 18.3 million square meters (4,448 acres) 10 kilometers (six miles) southeast of Baghdad.

The $2.1 billion order in May was in addition to an initial $8 billion deal announced in 2012.

The $8 billion agreement was the largest overseas construction project for a Korean company in 2012.

The expansion of the contract was attributed to the chairman’s constant efforts to establish a trust-based relationship with Iraq.

At the height of internal friction and war in Iraq in 2014, Kim visited the Middle Eastern country to meet with Iraqi government officials and encourage Hanwha E&C employees working there.

At the time, many multinational companies were withdrawing from the region due to the unstable geopolitical conditions and danger.

But Hanwha kept its operations functioning. “I know that it is challenging both mentally and physically to work here,” the chairman said. “But for the project to succeed, your contribution is critical.”

The commitment of the chairman and his workers eventually paid off.

Dr. Sami R. Al-Araji, chairman of the National Investment Committee from the Iraqi Government said, “I was impressed by Hanwha and its workers who devote themselves to working here despite sectarian wars and unstable conditions.”