In Seoul, consumers remain deaf to threat of war

In Seoul, consumers remain deaf to threat of war 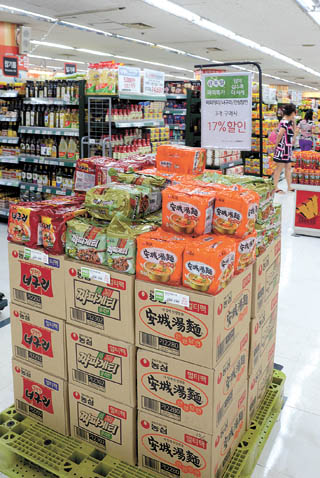 Stacks of instant noodles remain untouched Sunday at a retail store in Seoul. Despite rising tensions on the Korean Peninsula, consumers refrained from making mass purchases of daily necessities. [NEWSIS]

Tensions may have been running high on the border between the two Koreas on Saturday as the clock ticked down to the 5 p.m. deadline Pyongyang imposed threatening to take military action against the South, but this past weekend in Seoul was just like any other.

Even on Sunday, when news broke that North Korea had deployed roughly 50 submarines, South Koreans were spending their weekend at the movies, camping, golfing and strolling in the park.

Shoppers at major retailers like E-Mart and Lotte Mart filled up their carts, but at their leisure, not in preparation for a potential attack.

The weekend stood in stark contrast to attitudes two decades ago when North Korea’s founder Kim Il Sung passed away.

South Koreans rushed to nearby supermarkets at the time to stockpile daily necessities such as water and instant noodles out of fear that political insecurity in the North could lead to disaster.

But the only report this time that Seoul was in a panic came from the Uriminzokkiri, a North Korean propaganda website.

The female anchor claimed that, out of fear of an impending war, South Koreans were stockpiling necessities at a department store in Incheon, as fast-forwarded video clips showed consumers throwing vegetables into their baskets.

Between noon and 3 p.m. on Saturday, the report said, crowds three to four times bigger than the number of passengers with reserved seats in flights flooded the airport.

Overseas tickets, she added, were being scalped at 10 times the usual rate.

But it appeared the only people truly busy were the nation’s public servants.

Employees at the Ministry of Strategy and Finance and related institutes, including the Bank of Korea, have been on full alert since tensions between the two Koreas escalated.

Finance Minister Choi Kyung-hwan held a meeting Saturday to discuss possible anxiety related to the situation that could potentially cloud the market.

At the same time, he ordered market movements be closely monitored around the clock.

The credit default swap premium, an indicator of intensifying risks in a country, rose on Friday to 76, up eight basis points from the previous day - the highest on record since May 31, 2013, when it stood at 79.02.

Market experts, however, say that the geopolitical risks between the two Koreas will likely be short-lived, though they will undoubtedly have an effect on the financial markets.

“Based on past experience, the North Korean risks have never had a huge impact on the stock market,” said Byun Joon-ho, an analyst at HMC Investment & Securities, “and more recently, the influence of those risks has been shrinking.”