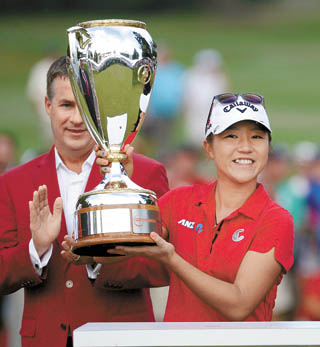 Lydia Ko holds up her trophy after defeating Stacy Lewis in the first hole of a playoff at the Canadian Pacific Women’s Open in Coquitlam, British Columbia, on Sunday. Ko and Lewis went to the extra hole after tying for 12-under 276. Ko, the 18-year-old Korea-born Kiwi, now has three victories this year. Defending champion Ryu So-yeon tied for third with fellow Korean player Kim Sei-young at 11-under.[AP/NEWSIS]