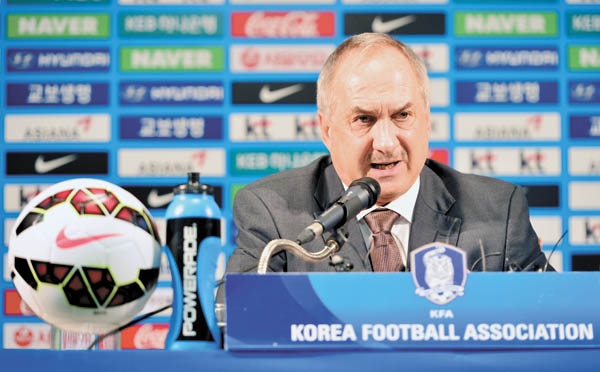 Uli Stielike announces national team squad for the 2018 World Cup second round Asian qualifiers against Laos and Lebanon next month at the Korea Football Association headquarters in Seoul on Monday.[NEWSIS]

Striker Suk Hyun-jun returns to the national football team for the first time in five years as coach Uli Stielike announced his 23-man squad for the World Cup qualifiers next month.

The Taegeuk Warriors host Laos on Sept. 3 in Hwaseong, Gyeonggi, before facing Lebanon five days later in the second round of the Asian qualifiers for the 2018 FIFA World Cup.

Suk, 24, currently plays with Portuguese club Vitoria Setubal. He will be wearing the national team uniform for the first time since a friendly game against Iran in September 2010.

Suk netted 10 goals in 40 matches with Vitoria Setubal last season. He previously played for Al-Ahli of Saudi Arabia and Dutch clubs like Ajax Amsterdam and Groningen, as well as Portuguese clubs CS Maritimo and CD Nacional. 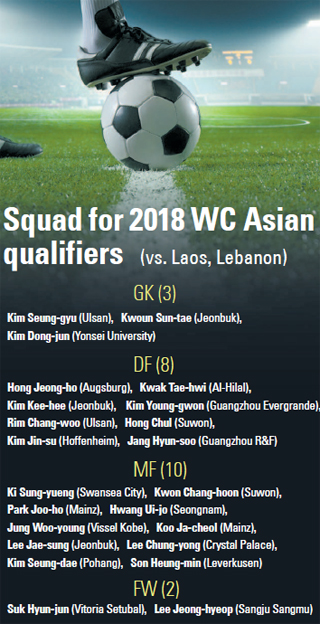 “I thought this was the right time to pick Suk Hyun-jun,” Stielike said in a press conference held at the Korea Football Association headquarters in Seoul on Monday. “I think we have established a basic structure for the national team, and at this point, there shouldn’t be a major problem to include new players.”

Suk, who is 190 centimeters (6 feet 3 inches) tall, replaces Kim Shin-wook, the 196-centimeter striker from Ulsan Hyundai. However, Suk will still have to compete for the top striker position against Sangju Sangmu’s Lee Jeong-hyeop, who has been Stielike’s regular selection.

Despite winning the EAFF East Asian Cup earlier this month, the men’s team has been criticized for scoring few goals. In a match against North Korea, the team took more than 20 shots but finished in a disappointing 0-0 draw.

While Ulsan’s Kim Shin-wook and V-Varen Nagasaki’s Lee Yong-jae were dropped, Stielike said he will solve the problem with new players like Suk, as well Seongnam FC forward Hwang Ui-jo.

Hwang, who turns 23 this Friday, trained with the national team last year in Jeju but never made it on the final roster for international matches.

He is currently the second-highest scorer in the K-League Classic after bagging 10 goals in 24 matches.

“I think my consistent performance with the club led to my national team selection,” Hwang said. “I will learn from the senior players and play actively when I get the chance.”

The biggest change in the roster was in the goalkeeper position, where Jeonbuk Hyundai Motors’ Kwoun Sun-tae and Yonsei University’s Kim Dong-jun were called up for the first time under Stielike. They will compete against Ulsan’s Kim Seung-gyu.

The pair is replacing Cerezo Osaka’s Kim Jin-hyeon, who is recovering from a collar bone fracture, and Suwon Samsung Bluewings veteran Jung Sung-ryong, who is completing his military training.

Kwoun was tapped for the national team in February 2012 but never played a match. The 29-year-old was expected to join the squad because of his recent performances.

Last year, he allowed only 19 goals in 34 matches, helping Jeonbuk win the K-League title. This season, he has given up 26 goals in 26 matches for the league leader Jeonbuk.

The biggest surprise was Yonsei University junior Kim, who has been with the under-23 Olympic football team. The 20-year-old is the first college student to be included on the national team roster since Kim Bo-kyung, then with Hongik University, who was picked in Jan. 2010.

“I want to test who can be included as the next-generation goalkeeper for the national team,” Stielike said.

The 60-year-old German also called up Europe-based players like Ki Sung-yueng, Son Heung-min, Koo Ja-cheol and Lee Chung-yong, even though their recent performances have been unimpressive due to injuries and they have struggled to become regular starters.

“I hope players think of the national team as their home and return to their respective clubs with more confidence afterwards,” the coach said.