Nuclear may give Japan export edge

Nuclear may give Japan export edge 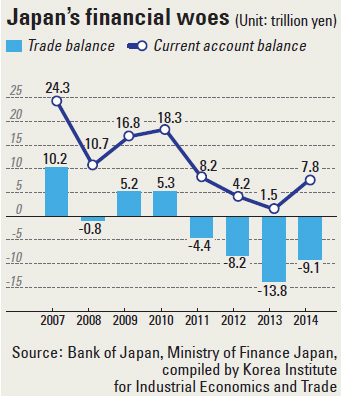 The Japanese government’s policy to resume operation of its nuclear power plants earlier this month may lead to Japanese exports outperforming rival products from Korea, according to a local research institute.

The Korea Institute for Industrial Economics and Trade (KIET) released a report Monday saying that the nuclear plants are expected to cut electricity costs and boost production of shipping machinery and electronic devices.

Shipping machinery and electronic devices are Japan’s two flagship exports, accounting for about 40.4 percent of total exports as of last year.

But the two products are also crucial for Korea, accounting for 50.7 percent of total national exports last year.

“As Japanese manufacturers are now free of production cost concerns caused by absence of nuclear power,” wrote the KIET report, “Korean businesses will have to prepare to compete against Japanese products that will get cheaper, as well as compete with Japanese nuclear companies that will resume exporting their technologies.”

The measure raised the average industrial electricity fee by nearly 18 percent in 2012, as the nation’s largest power distributor expanded operations of its expensive LNG, renewable and coal thermal power plants. This resulted in reduced domestic production and an exodus of Japanese manufacturers’ production lines.

Studies from research institutes in Japan, including Fujitsu Research Institute, expect that Japan’s gross domestic product may face an annual reduction of up to 0.1 percent every year without nuclear power.

In the wake of worsening economic indices, the Shinzo Abe administration decided to reverse the previous administration’s decision to close all nuclear power plants, in line with Abe’s export recovery initiatives, such as reduced corporate taxes for manufacturers bringing factories back to Japan.

Earlier this month, the Abe administration announced intentions to resume operations of all 51 nuclear power plants by 2030.

The revival of nuclear power is estimated to reduce Japan’s trade deficit by at least 3.7 trillion yen every year, according to Japanese Ministry of Economy, Trade and Industry, and expand annual domestic production to 2.5 trillion yen by 2030.

“With cheaper prices and product quality, Japanese companies will be able to penetrate better into the emerging countries’ middle class markets,” said Kim Yang-paeng, a researcher at KIET. “Korean businesses will have to roll out products to differentiate themselves from cheaper Japanese alternatives.”