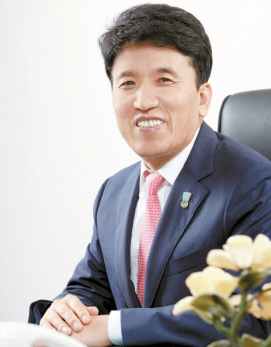 Hana Financial Group said Monday that it has appointed Ham Young-joo, the deputy president of Hana Bank, as president of KEB Hana Bank.

Ham is expected to be confirmed during the general shareholder meeting on Sept. 1, the group said. KEB Hana Bank, the merged entity of the Korea Exchange Bank and Hana Bank, will also be officially launched on the same day.

“We have proposed the candidate with the greatest focus on synergy between the two banks,” the executive recommendation committee at Hana Financial Group said in a statement.

“We believe Ham is the best person to maximize the synergy between the two banks, as a person who has earned deep trust within the organization and has also shown to have excellent communication skills.”

Ham has headed the group’s sales in the Chungcheong region since 2013 and has a track record of notable successes. His campaign of “one bank deposit book per person and per firm” helped Hana become a leading bank in the area.

Ham was born in 1956 to an impoverished farmer in Buyeo District of South Chungcheong, a region so poor it did not have electricity until Ham was in high school.

Due to financial strains at home, Ham went to trade school instead of college, and started working at Seoul Bank, which would later merge and become Hana Bank. He later attended night classes and earned an undergraduate degree in accounting from Dankook University.

His career is the classic rags-to-riches story, with Ham beginning as a junior banker in 1980 and climbing the corporate ladder step by step. He moved up to branch manager at Seoul Bank’s Suji branch, and, after the merger, as a manager at Hana Bank’s Bundang branch.

He later became a senior manager of household sales, then the director of the southern region. Finally, he was promoted to the head of sales for the Chungcheong region and deputy president of the bank.

“Ham’s career path is inspirational for us all, rising from a position of a junior banker to the head of a bank due to his warm people skills, hard workand track records of success,” Hana Financial Group said in a statement.

Affectionately nicknamed “country bumpkin,” his personal motto is “to serve and to be considerate with a humble mind-set,” according to Hana Financial Group.

Ham is also well known for his personal attention to his subordinates at the bank, remembering the names and birthdays of around 1,000 employees who work at Hana’s Chungcheong sales group.