KDB Daewoo Securities, 2 other units, put on block by bank

KDB Daewoo Securities, 2 other units, put on block by bank 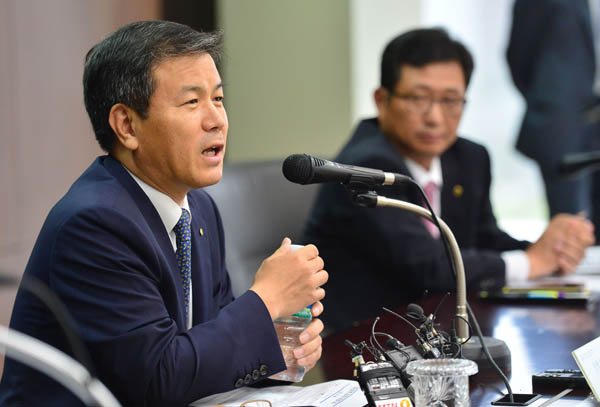 The nation’s second-largest brokerage house is finally on the selling block as KDB Bank announced plans to put KDB Daewoo Securities up for sale in October.

The market has long been awaiting the sale, which it expects to be the biggest M&A for the second half of the year.

KDB Bank Monday announced it will sell all of its 43 percent stake in KDB Daewoo Securities. In addition to the brokerage, two other affiliates - KDB Asset Management and KDB Capital - are also being put up for sale.

The bank said the asset management company could either be sold with the brokerage or independently. It will be selling KDB Capital separately.

The market expects KDB Bank to pull in a minimum of 2 trillion won ($1.7 billion) from the sales and possibly 3 trillion won. Market participants say KB Financial Group has shown interest in purchasing the brokerage to diversify its portfolio.

One problem is that while the state-run bank is trying to sell off the brokerage, the value of KDB Daewoo Securities shares have recently been falling.

KDB Daewoo Securities shares closed 0.43 percent higher on Monday from Friday’s close at 11,750 won. This is a 23 percent drop from 15,350 won on July 24. The market capitalization of the brokerage is now 3.84 trillion won. In just a month, the company has lost more than 1 trillion won in market capitalization. During the same period, KDB Bank lost 505.7 billion won in the value of its share of the brokerage.

During a press conference Monday, Lee Dae-hyun, KDB Bank’s vice president, said it will accept bids from foreign investors for the brokerage. The buyer will be selected early next year.