At IAFF Worlds, Bolt bests Gatlin in a nail-biter

At IAFF Worlds, Bolt bests Gatlin in a nail-biter 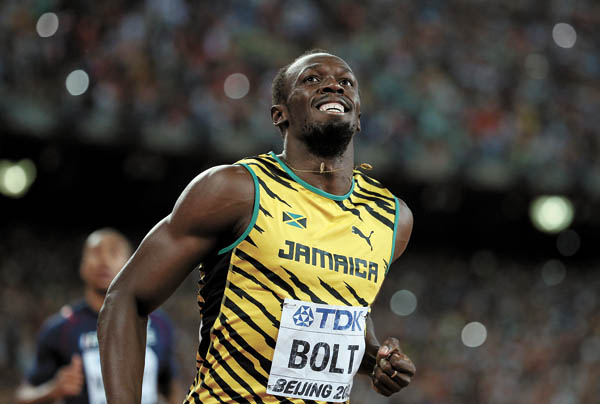 Usain Bolt celebrates after winning the men’s 100-meter final at the 2015 IAAF World Championships in Beijing on Sunday.[XINHUA/NEWSIS]

BEIJING - A heart-stopper. A lean at the line. A next-to-nothing margin over a more-than-game challenger.

Sure, for Usain Bolt, the winning result, the bow-and-arrow victory celebration and even the setting may have been the same as 2008. But the show he put on Sunday in a .01-second victory over Justin Gatlin at the Bird’s Nest was something very different.

Bolt crossed the line in 9.79 seconds - pedestrian by his standards. Yet it very well may have been his greatest race ever.

The 29-year-old Jamaican came in hurting and anything but race ready, a far cry from seven years ago, when he put his stamp on the Beijing Olympics in the same stadium by slowing down and bringing his hands out to his side to start the celebration with 20 meters left. Even with that, he crossed the line in a then-world-record time of 9.69 seconds.

By now, that’s ancient history, and the proof was in the results from the last two years. Gatlin has been dominating the sprint game, while Bolt has spent more time rehabbing than racing.

The problems carried right into Sunday. Bolt’s semifinal run - normally a stress-free jog - turned dicey when he stumbled on his fifth step out of the starting block. He was in sixth place more than halfway through and had to push to beat Trayvon Bromell.

In the next semifinal race, Gatlin breezed, just as he had the night before in the heats. Set against each other, those performances turned Gatlin into the betting favorite, and who could argue?

And so, the stakes were set: The world-record holder and track’s happy warrior against a twice-convicted doper, who also won the 100 at the 2004 Olympics and the world championships in 2005.

That Gatlin burst from the blocks faster was no surprise; Bolt was his typically slow self in unfurling his 6-foot-5 frame from the start.

That Gatlin was winning at the halfway point wasn’t too shocking, either. “The best part of my race is usually the end,” Bolt said.

At 80 meters, the math started changing. Bolt drew to within a step, but Gatlin was holding him off.

Then, with about 15 meters left, Gatlin over-strided, then did it again, then started leaning toward the line. Bolt stayed upright, crossed with a big kick and with his chest pushed forward. A sliver of space for a man who wins by body lengths.

After eyeing the scoreboard, Bolt punched his right fist down and kicked his left leg up, a clearly unchoreographed celebration for a man who often starts planning them while the race is still going.