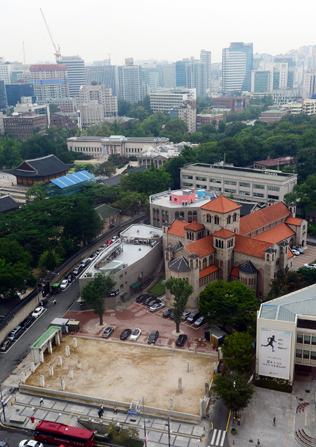 The National Tax Service annex building, next to Deoksu Palace in Seoul, has been torn down. The building was constructed by the Japanese during their colonization of Korea (1910-45). With the building gone, passersby can now better appreciate the beautiful architecture of the Seoul Anglican Cathedral. [NEWSIS]

A building that served as an annex for the National Tax Service, built by the Japanese during their colonial rule of Korea from 1910-45, has finally been torn down.

And the site, which is adjacent to Deoksu Palace in Seoul, will soon become a park open to anybody.

With the building out of the way, passersby can now better appreciate the beautiful architecture of the neighboring Seoul Anglican Cathedral.

The Seoul Metropolitan Government held a celebratory event last Thursday at the site, where officials intentionally left remnants of 23 pillars to commemorate the painful history.

Removal of the building was part of the city government’s ongoing efforts to remove remnants of Japanese colonization, during which many of Korea’s historical sites and natural landscapes were either damaged or altered against the will of the Korean people.

In the case of the site of the former National Tax Service annex, it was actually part of Deoksu Palace.

But as part of Japan’s efforts to undermine Joseon’s royal authority, Deokangung was relocated in 1929 and Deoksu Palace was significantly downsized, along with other Korean palaces. In 1937, the Japanese constructed a building on the site, which they used to house the department of the Japanese Government-General in charge of mail, insurance, telephone service and some other operations.

In April, as it was deliberating on how it could mark the 70th anniversary of liberation from Japanese rule, the Seoul government decided to demolish the building.

At the event last week, Seoul Mayor Park Won-soon said that with the collapse of Joseon, “tragedy began in this land, but in the future, there should be hope and happiness here,” referring to the site.

“It’s meaningful that the space that used to be where the Korean people paid utility fees to Japan and taxes to the central government, which was a symbol of top-down authority, will now be transformed into a park by the citizens, for the citizens,” said Seo Hae-seong, artistic director for the Seoul government’s project.

Officials also noted that the area is surrounded by other structures that played an important role in Korea’s turbulent modern history.

The Seoul Anglican Cathedral, for instance, was built in 1926. Although in principle it is a Western-style stone structure, it also embodies many elements of traditional Korean architecture.

While the Seoul Metropolitan Government is currently accepting ideas for a park, for now, it plans to leave it as an empty lot with the remnants of 23 pillars to allow Korea’s current generation learn about the history of the site and the country.

And since it used to be part of Deoksu Palace, officials are also planning an archaeological exploration of the site sometime in November.