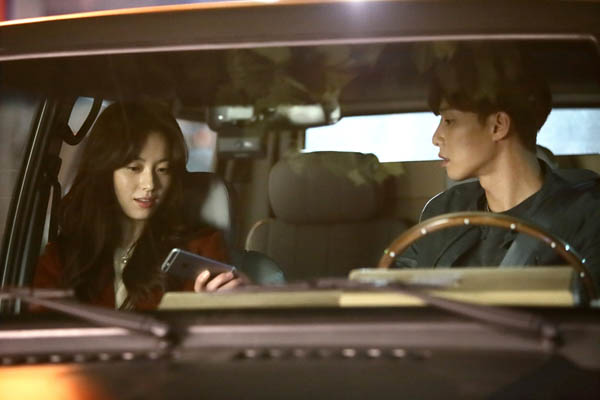 Baek Jong-yeol’s debut feature “The Beauty Inside” opened nationwide with 486,209 attendees over the weekend, landing it in second place. It depicts the heart-rending love story of Yi-soo (Han Hyo-joo), left, and Woo-jin (Park Seo-joon), who wakes up everyday in a different body. Provided by Next Entertainment World

It is still a sizzling summer for “Veteran,” which stayed in first place for the third consecutive week, inching closer to the 10 million admissions mark. Fantasy romance flick “The Beauty Inside” also made a notable debut in second place.

With more than 20 notable actors playing the role of 29-year-old Woo-jin, who wakes up every day in a different body, the film has been making headlines for quite some time. Actress Han Hyo-joo plays Yi-soo, who falls in love with the ever-changing Woo-jin.

Although the film has received mediocre reviews from local film critics for containing a bland love story, the contemporary romance film handled by Next Entertainment World is off to a fairly good start.

The soft melodrama apparently won the hearts of 20-something female viewers.

Meanwhile, the popularity of Choi Dong-hoon’s historical action film “Assassination” didn’t subside in its fifth week at the local box office. Garnering 484,214 attendees over the weekend, it has now been seen by 11.5 million moviegoers, raking in 90 billion won so far.