A prime minister and a mysterious shooting

A prime minister and a mysterious shooting 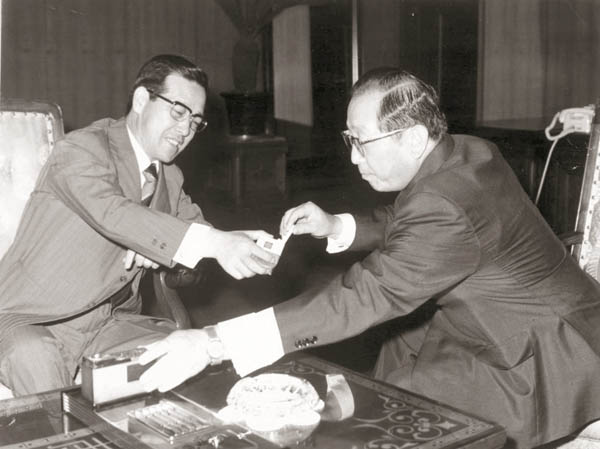 Prime Minister Kim Jong-pil, left, gives a cigarette to Chung Il-kwon, the speaker of the National Assembly, in October 1974 in Chung’s office at the assembly. Provided by Kim Jong-pil, [JoongAng Photo]

The person who served in high-ranking positions for the longest period of President Park Chung Hee’s 18 years as president was probably Chung Il-kwon (1917-1994).

President Park must have seen something special in him. Park often appointed people to bring skills that he thought were lacking otherwise.

While many of Park’s go-to guys were talented - such as Kim Hyeong-wuk, a person with drive, and Lee Hu-rak, who was good at planning - Chung didn’t have any noticeably unique traits. He must have been very lucky with his career. He did well in every aspect. 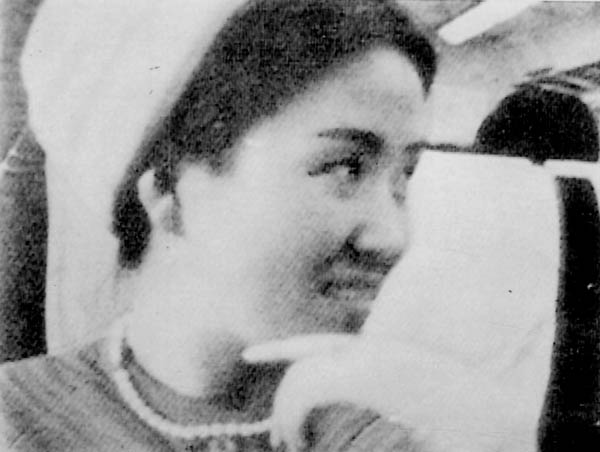 Jeong In-suk, a hostess of a luxurious restaurant, was killed in March 1970. She had a three-year-old son.

Chung made it a habit not to express his feelings and pretended to be gentle and calm with others. He appeared to be a nice guy. He was pretty obsessed with high-ranking positions, but he wasn’t greedy enough to be monitored by President Park’s guards. He wasn’t a person who desired to become president. Other aides of Park didn’t pay much attention to Chung.

Though he served the longest period among high-ranking officials under Park, he had a blank in his career, which was the eight months from when he stepped down as ambassador to the United States in April 1963 to when he was appointed foreign minister in December.

In the summer of 1963, while he was studying at Oxford University in England, he visited me in Paris. At the time, with intense internal conflict over the issues of forming the DRP and transferring power to a civilian government, I chose to go on a trip to Europe.

I asked him about what he was going to do.

As if he had been waiting for me to ask, he said, “Can you ask Park to give me a job in Korea? I’m tired of being outside of my country.”

That was when Park, chairman of the Supreme Council for National Reconstruction, listened to my suggestions.

Considering his experience, I asked, “Would you like to be foreign minister?”

“It doesn’t have to be minister,” he replied. “I will appreciate any job back there.”

I immediately picked up the phone and called Park.

“General Chung Il-kwon in London wants a job back home,” I said.

“What about foreign minister?”

“OK. I’ll think about it.” Park called me a day or two later and told me to bring Chung in.

That’s how Chung came back to Korea. Later that year, Park won the presidential election over Yun Po-sun and then named Chung foreign minister. In May 1964, Korea needed a cabinet reshuffle after a fierce protest of Korea-Japan diplomatic relations negotiations. As chairman of the DRP, I recommended Chung as prime minister. Chung asked Park to bring in Hankook Ilbo President Jang Gi-yeong as his deputy prime minister for economic affairs and Park accepted the idea.

I believe Chung flew from London to Paris to meet me that summer because he was with me when I visited the United States in October 1961 as the director of the Korean Central Intelligence Agency (KCIA). He assisted me when I met with U.S. Attorney General Robert Kennedy, a brother of President John F. Kennedy.

In the meeting, Kennedy tested me by resting both of his feet on a drawer. I responded by lying down on a couch. Chung was inspired by my bold behavior and came to Paris believing that I would do something for him.

Chung faced a crisis in his career as prime minister, but he got away with it.

At 11 p.m. on March 17, 1970, a gunshot was heard from a Ford Cortina on a riverside road next to Mt. Jeolsa, western Seoul. A 25-year-old woman was found dead later. Her name was Jeong In-suk and she was a hostess of a luxurious restaurant named Seonungak.

The government later announced that her brother Jeong Jong-wuk, who worked as her driver, killed her. But that raised suspicions because they were family members and also because the public security department of prosecution took the case, not the crime department or police. A rumor also spread that Jeong In-suk’s three-year-old son Seong-il was the son of a powerful man.

Then it was revealed that secretary of the prime minister allowed Jeong to get a passport and her background check was handled by the chief secretary to the KCIA director.

In May 1970, New Democratic Party (NDP) representatives called Prime Minister Chung to the National Assembly’s plenary session and said, “It’s been rumored that Seong-il is Chung’s son and that Jeong had been connected with 26 people, including President Park,” which started the biggest political scandal of the day.

The reason Park was on the list was purely because Prime Minister Chung didn’t behave properly. A few months before Jeong died, there was a rumor in political and diplomatic channels that a powerful man was behind Jeong.

Every time the issue was brought up, Chung said, “I’m being framed to protect someone else,” implying it may be President Park.

Jeong was influential enough to be believed as Park’s paramour.

After Jeong was killed, I visited the Blue House one day and Park said, “Chung just came by.” Park said Chung confessed that it was he who had a relationship with Jeong and begged for Park’s mercy.

“If the prime minister of a country is investigated for a sex scandal, the entire country will be disappointed. It is a matter of national dignity,” Park said. “So I told Seoul District Prosecutors’ Office Public Security Department head Choi Dae-hyeon to treat it as a security issue.”

The investigation fizzled out.

Park then asked me, “Is that really you that introduced Jeong to Chung?” I looked bewildered by the question.

Park said, “Chung said it was you.”

I went out of the Blue House and went to Chung.

“How could you tell President Park that I introduced Jeong to you?”

With a hangdog look, he said, “When a number of Japanese lawmakers came to Korea, you held a party at Seonungak and that’s when I met Jeong.”

I was taken aback. Just because I paid for the party didn’t mean I introduced him to the woman.

“When President Park suddenly asked me who introduced us, I accidently said that Chairman Kim Jong-pil of the DRP did.”

I returned to the Blue House and told Park what had transpired.

About nine months after the incident, Chung stepped down when the entire cabinet tendered their resignations. This was how Park kept the dignity of the country but also expelled his prime minister.

But Park did not expel people because of groundless rumors, such as the one about himself being involved with Jeong. I know him and Park didn’t even meet Jeong once.

Park took care of Chung after he left the cabinet. In 1971, he was elected in the general election and then elected again under the Yushin government in 1973. During the period, he served as speaker of the National Assembly. That was how Chung became loyal to Park.