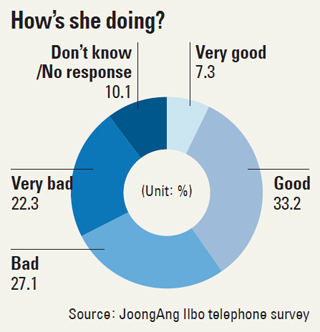 President Park Geun-hye’s performance in the first half of her term got a thumbs down from about half the people surveyed, a recent JoongAng Ilbo poll showed.

Only 40.5 percent gave a positive evaluation. The JoongAng Ilbo, an affiliate of the Korea JoongAng Daily, conducted the survey from Aug. 19 to Aug. 20.

In contrast, 55.8 percent of respondents in their 50s and 71.6 percent of those in their 60s or older said Park’s performance was good.

Among those who were negative overall, 35.1 percent said her performance in politics was problematic, while 34.4 percent said she did not do well on economic issues.

The poll showed that one out of four supporters of Park had changed their mind. Of respondents who said they voted for Park in 2012, 25 percent said she had done a bad job as president.

Among supporters of the ruling Saenuri Party, 20.6 percent said Park’s performance was poor.

The respondents made clear that the economy should be the top priority for Park during the remainder of her term. According to the poll, 30.8 percent said Park’s priority should be economic growth, while 25 percent said she should focus on easing the wealth gap.

They expressed less of an interest in improving inter-Korean relations, national security and diplomatic capabilities of the country.

Asked about Park’s decision to shift her approach to North Korea and Japan, as described in her speech to mark the 70th anniversary of the Aug. 15 Liberation Day, the public generally supported the idea. In her address, Park said she will maintain her principles toward the North and Japan but engage in talks to secure pragmatic gains. The poll showed that 65 percent supported her stance, while 25.3 percent said they do not.

Park’s labor market reforms were supported, the poll showed. On Aug. 6, Park said conglomerates, top income earners and workers with salaried jobs must make concessions to create jobs for young workers. The poll showed that 67.2 percent of the public support her agenda, while 30.3 percent said they disagree with it.

The Park administration is pushing labor reforms, including a peak wage system under which the people nearing their retirement keep their jobs but their salaries are reduced gradually. The poll was conducted through random mobile and landline telephone surveys, and it had a 95 percent confidence level with a plus or minus 3.1 percentage point margin of error.