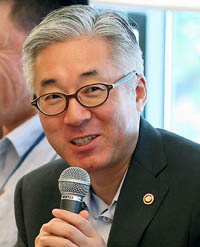 Minister of Culture, Sports and Tourism Kim Jong-deok reiterated on Monday that he will consider a foreign candidate to take the top post at the National Museum of Modern and Contemporary Art (MMCA), stating that there are no boundaries when it comes to contemporary art.

The position for MMCA director has been vacant since the Culture Ministry dismissed Chung Hyung-min in October 2014 amid allegations that she abused her authority. The Culture Ministry was also criticized for prolonged vacancies and recruitment based on connections.

Meeting with reporters to mark one year since taking charge of the ministry, Kim noted that 22 people had applied for the position. Twelve are foreigners.

The nomination could take place in October at the earliest, he said.

The ministry reviewed 16 candidates after dismissing Chung and in March, narrowed down the field to two finalists. However, in June, it announced that neither had been deemed fit for the job and started taking applications again.

Insiders in the art scene have expressed concerns about the latest recruitment, arguing that most of those qualified for the position already applied in the previous round; against this backdrop, Kim said in a recent interview that he was open to hiring a foreign candidate - both factors that may likely explain why more than half the current applications are from foreigners.

“After I made those remarks, many of the people around me tried to talk me out of [hiring a foreign director],” Kim said. “But I believe there are no national boundaries in contemporary art.”

Regarding the ministry’s recent announcement that it planned to build a cultural complex on land owned by Korean Air in Songhyeon-dong, central Seoul - where the company has long envisioned establishing a hotel - Kim explained that he had raised the idea with Korean Air Chairman Cho Yang-ho about five or six months ago.

Asked about the possibility that Korean Air may transform the complex into a hotel later, Kim said, “For the current project, it’s impossible. [But] how a private company may switch the direction of a project 10 to 20 years from now, [I] cannot know.”

After the ministry’s announcement last week, an insider at Korean Air told the Korea JoongAng Daily that the company “has not totally given up on the idea of building the hotel.”