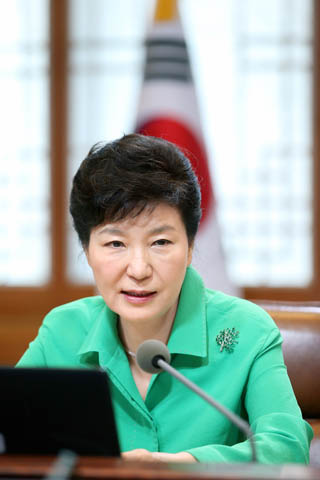 President Park Geun-hye presides over a meeting with her senior secretaries on Monday in the Blue House. Park said that cross-border propaganda broadcasts would continue unless North Korea apologizes for the planting of land mines in the demilitarized zone that seriously injured two South Korean soldiers earlier this month.[Joint Press Corps]

During a meeting with senior secretaries at the Blue House Monday, Park said she would continue the anti-North broadcast campaign as long as the condition for an apology is not met.

“The government will take appropriate action [if the North does not apologize],” Park stressed.

“[North Korea’s] direct apology is needed in order to prevent the recurrence of provocations” by Pyongyang, the president said, adding that the neighbor state had “repeatedly carried out such provocations and stoked tensions” on the peninsula in the past.

On the meeting in the truce village of Panmunjom that continued through press time yesterday, Park said the talks must lead to Pyongyang apologizing and promising not to repeat such acts again in the future.

“The government will not stand down even in the face of the North’s threat to national security,” she said.

Park’s hard-line stance on Pyongyang came as high-level talks between the two Koreas stretched through their third day on Monday.

No details were disclosed, but expectations were high that they could pave the way to a reduction of tensions that have brought the two rivals to the brink of a military confrontation.

South Korea is represented at the talks by Kim Kwan-jin, director of National Security, and Minister of Unification Hong Yong-pyo. North Korea is represented by Hwang Pyong-so, director of the General Political Bureau of the North Korean Army, who is considered the second-most powerful man after supreme leader Kim Jong-un, and Kim Yang-gon, the top official in charge of inter-Korean relations for Pyongyang.

Park’s emphasis on receiving a formal apology from Pyongyang for the land mine detonations fueled speculation that the apology had emerged as the center of the dispute between the two sides.

“North Korea contacted us for talks because it badly wants us to withdraw the propaganda broadcasts,” a presidential aide told the JoongAng Ilbo, an affiliate of the Korea JoongAng Daily, on the condition of anonymity. “But President Park made it clear that there would be no withdrawal as long as the North refuses to apologize.”

Min Kyung-wook, the Blue House spokesman, said at a briefing early Monday that “the delegates were having intense discussions in the midst of the critical security situation.” He did not provide details.

The protracted talks kept presidential staff awake through Sunday night, as they did Saturday night. President Park, chief of staff Lee Byung-kee and other presidential staff stayed awake for the second consecutive night to be briefed on the progress of the talks.

Key issues thought to have been addressed in the talks included an apology for the land mine blasts, a halt to the propaganda broadcasts, lifting of economic sanctions imposed in retaliation for the sinking of the Cheonan warship in 2010 and resumption of Mount Kumgang tours, which served as a cash cow for the reclusive state until they were suspended in 2008.

The crisis that brought the Koreas to the brink of military action began when three land mines were triggered in the southern side of the DMZ on Aug. 4. One soldier on patrol lost both legs while another lost a foot.

Seoul blamed Pyongyang for planting the land mines following a joint investigation with the UN Command, and the South Korean military resumed its propaganda campaign via loudspeakers installed at borderline units. The resumption came 11 years after the broadcasts had been stopped by mutual agreement with the North when the two Koreas were on good terms.

The North, annoyed by the resumed campaign, fired artillery shells last Thursday across the border, apparently as warning shots. That led to a brief exchange of fire between the two sides. The North then gave a 48-hour ultimatum for the South to stop the loudspeaker campaign and warned of a dire military consequence should its demand not be met. Tensions rose to levels not seen in years.

Although tensions appeared to have been a bit softened over the weekend as the two sides engaged in lengthy talks, reports by South Korea’s military Sunday that the North had doubled its artillery power along the border and dispatched 70 percent of its submarines into operation over the weekend added to a sense of threat.

North Korea’s state media continue to ratchet up a sense of emergency Monday. The Rodong Sinmun, the North’s state-run daily, ran six pages in the Monday edition devoted to calling for unity among North Koreans to fight the “imperialist United States” and the “South puppet state.”