Artists are inspired by everyday themes

Artists are inspired by everyday themes 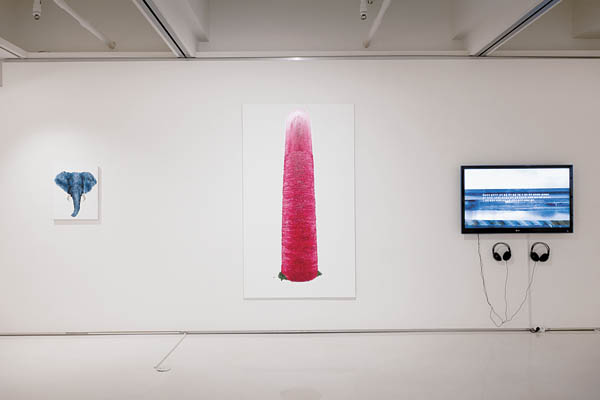 Artist Im Youngzoo’s “Sul Sul Sul Apt.” consists of a documentary video and paintings about an apartment complex in Daegu and the superstitious beliefs surrounding it. Provided by the museum

Although people often feel alienated from contemporary art, many young Korean contemporary artists deal with themes that are closely related to the issues and problems we face in everyday life. This is seen at “The Butterfly Effect,” a group exhibition that starts at the Kumho Museum of Art in central Seoul on Thursday.

The show features the nine artists now participating in Kumho Art Studio, a residence program run by the museum to support young Korean artists. Since 2005, the studio, located in Icheon city in the southern part of Gyeonggi, has provided one- or two-year studio rentals to each of its 61 artists.

In this exhibition, Lee Sujin deals with what is lost in translation. To the artist, translation is not only about foreign languages but also about converting between speech and written text. When what is spoken is translated into written text, the characteristics of the voice, the intonation, tone and pauses between words, are lost.

“I’d like to share my experience of imperfectness of translation with the audience through my works” Lee told the Korea JoongAng Daily at the Icheon studio last month. 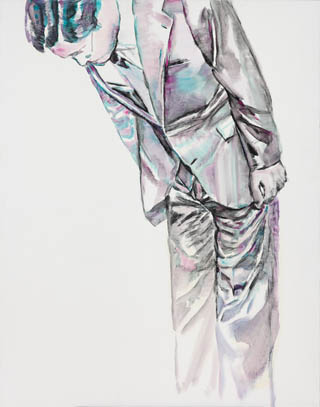 Lee Jihyun’s painting depicting an apologizing man is part of “The Butterfly Effect” exhibition at the Kumho Museum of Art.

One of her works is a video piece titled “Text to Speech (Statement).” In the video, the text of Lee’s artist statement is presented in the way that song lyrics are shown on a noraebang or karaoke machine monitor. So the audience is led to speak along with the text, in other words, to translate the text into speech. But the results are diverse, as translation is fundamentally imperfect.

Among the other artists is Lee Jihyun, who deals with various types of violence - both physical and mental - that we face in person or in the news media in her paintings. Her past paintings do not depict the scenes of violence but their results, such as the families of the victims of the 2014 Sewol ferry sinking disaster, who cover their faces with their hands, and the body of Private First Class Yun, the victim of a 2014 military violence case, covered with purple and blue bruises.

In this exhibition, she presents her latest paintings depicting a man bending his body, a typical gesture of apology to the public used by Korean politicians and government officials.

Im Youngzoo’s works are the most humorous in the exhibit.

Her “Sul Sul Sul Apt.” project consists of a documentary video and paintings. It is about the real apartment complex in Daegu that is rumored to have a higher birth rate than other areas and to bring babies even to couples suffering from infertility. According to the documentary, many residents, neighbors and feng shui experts believe it, saying that the apartment site’s unique topography, which some say resemble a womb, and a sculpture in the apartment’s garden, which resembles a penis, create the harmony of yin and yang and a strong force of fertility.

“People these days boast that they are scientific and reasonable, but they have taken just one step out of the boundary [of primitive religion or folk beliefs],” the artist said at the studio last month. “And they could step back at any time.”