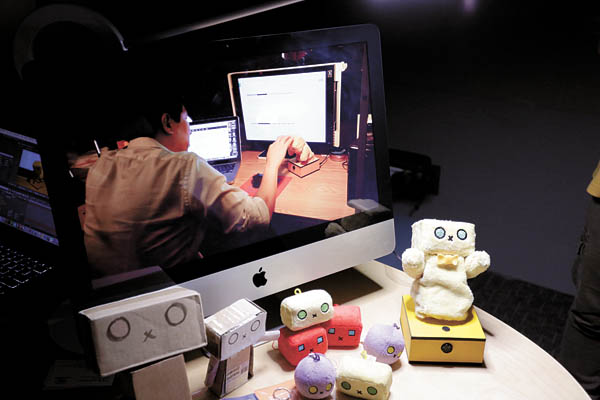 R2E BOT can be a comforting friend sitting next to your computer in a dreary office. Using a voice recognition system, it reacts to the emotions of the user. Provided by the art center

As the world moves into a new era of technological innovation and people find themselves more and more dependent on digital gadgets, science fiction films like “Her” (2013) don’t seem so strange, and it’s possible to imagine a day when a human might develop a relationship with a robot.

In the film, Theodore, played by Joaquin Phoenix, develops a relationship with Samantha, an intelligent computer operating system that is personified through a female voice, played by Scarlett Johansson.

Today’s robots are not yet as intelligent as Samantha, but at Art Center Nabi in central Seoul there are six robots that try to connect with people emotionally. 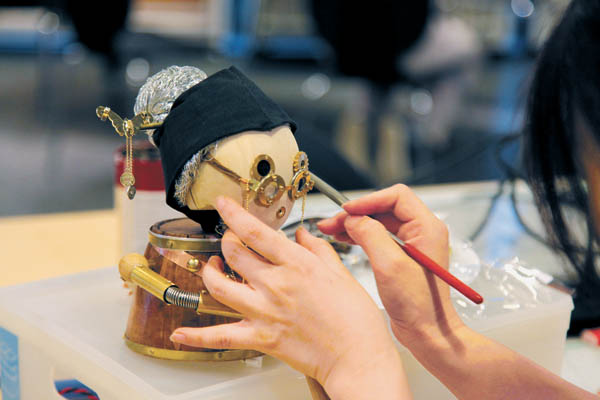 Since 2013, Art Center Nabi has been holding a so-called hackathon, an event where computer programmers and software and hardware developers get together to collaborate intensively on developing new ideas and technology. This year, the art center invited software and hardware developers to the H.E.ART BOT (Handcraft Electronic Art Bot) Hackathon for three days from Aug. 10 to 12, in an effort to illustrate that it is “not that difficult for a person who is not an expert robot maker to create a robot” as well as show the public that “robots are not all cold, overpowering robotic machines.” 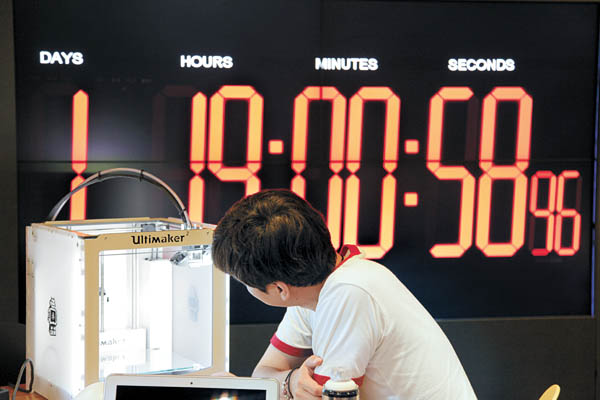 Ahn Se-won works on his Da Dwe Ji, a robot that looks like a pig, during Nabi Art Center’s hackathon event.

Using 3-D printers and other materials provided by the art center, the 13 participants, who were split into six groups, had to come up with a robot that has “a warm heart that can touch the emotions of people,” as the event’s title implies. At 5 p.m. on the final day, the participants showed off their works and held an open exhibition for the public.

Choi Jae-pil and Jeon Hyung-jun created Our Egg, which connects two individuals who might be far away from each other. When one user gives the egg-shaped robot sitting beside the computer a gentle push, it sways back and forth while glowing in bright pink. At the same time, an identical egg-shaped robot sitting on the second user’s dining table also sways back and forth, glowing the same color.

“There are many ways to communicate with people, such as mobile phones, SNS and so on. The tools are increasing but people are in fact getting thirstier for more communication,” said Choi. “They look for their own window of communication, but at the same time, their busy lives lead them to forget the existence of their precious family and friends. We wanted to focus on that and came up with Our Egg.” 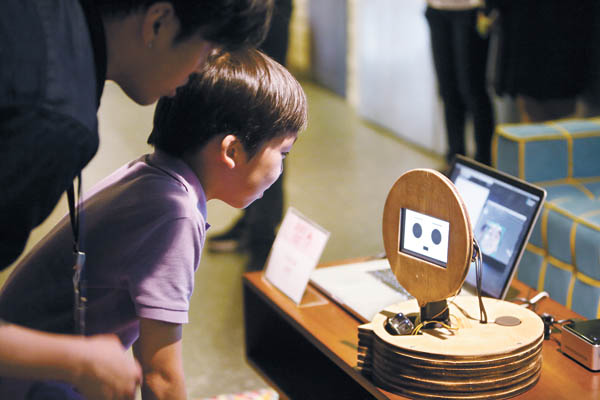 A visitor to the exhibition on the final day of the event, Aug. 12, looks at Seo Young-bae and Park Il-yong’s robot, Momoto.

Using just a small gesture, Our Egg acts as a bridge reminding users of the existence of others, Choi said.

Meanwhile, Kim Yong-seung and Jung Min-jeong’s Gran Bot swears. Basing their idea on the stereotypical image of Korean grandmothers, who are always on their grandchildren’s side no matter what - to the extent that they’ll hurl curses at anyone who hurts their grandchildren - the duo created a robot that speaks to users. When you greet the Gran Bot, she responds like a happy grandmother, but when you tell her that you had a bad day, she’ll curse your enemies, but, of course, in a cute way.

“My wife is quite introverted, and I got the idea of a Gran Bot when I saw her not being able to vent her anger,” said Kim. “When Gran Bot cursed for her, she was thrilled.” 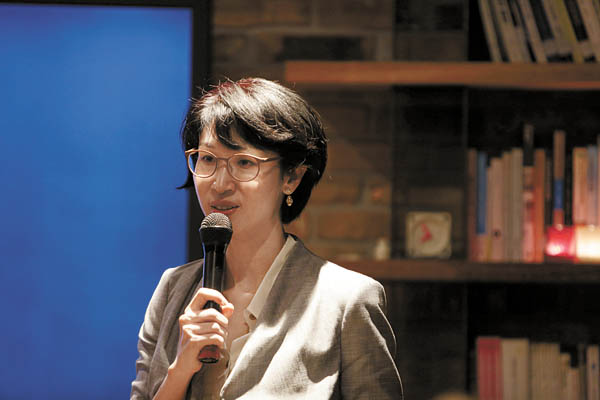 Art Center Nabi Director Roh So-yeong, wife of SK Group Chairman Chey Tae-won, has been running the art center specializing in media art for 15 years. Emotional communication between robots and humans, according to Roh, has been what the center has been working toward for the past 10 years.

“When we started to agonize over this issue 10 years ago, people didn’t even try to understand this,” she said. “Now we are in an era where we can solve this together.”

When asked whether she thinks it is pitiful for people to depend on robots for emotional comfort, Roh said that there is no choice because “Pandora’s box has already been opened.”

“There’s no turning back,” she said. “The number will increase and human beings will depend on robots more and more. What we can do, at least, is to look for the best way to communicate with them.”