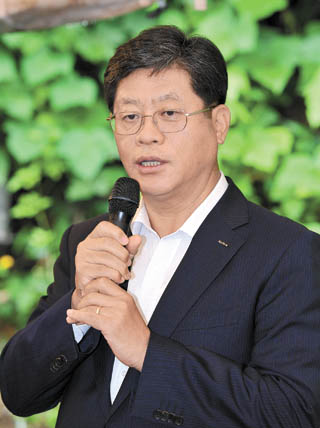 The agency is conducting research through Kotra branches located across the world, and will unveil the results next month.

“Korea revived sluggish exports after the 2008 global financial crisis by pushing aggressive marketing events and marketing strategies,” said Kotra CEO Kim Jae-hong at a press conference on Tuesday. “We hope to turn the crisis into a new opportunity to expand our flagship markets.”

Korean exports shrunk for seven straight months as of July, due to problems like the Middle East respiratory syndrome outbreak at home and the slowdown of Chinese economic growth, and are predicted to get even smaller by the end of August. According to the Korea Customs Service, August exports contracted 11.7 percent year-on-year as of Aug. 20, posting $22.6 billion.

Things aren’t looking much better for the second half of the year, with the U.S. Fed’s scheduled base rate hike and the worsening Chinese economy.

Hoping to counter fears that Chinese consumers may buy fewer foreign products because of the yuan’s devaluation, which makes Korean products pricier, Kotra said it was planning a series of aggressive discounts and promotional events in China.

Kotra said it will expand its second Xing Xing Korea event, scheduled for November during Singles Day, by joining hands with local e-commerce companies like J.D.com and Vip.com. The event will include discounts of up to 58 percent on products sold by Korean duty-free, home shopping and other online retailers.

It will also try to tackle new export markets like Iran and Cuba. Kotra will open assistance centers in Seoul in September for companies interested in Iran, and will hold investment consulting sessions the same month for companies hoping to enter Cuba.