Stocks on both Korean bourses rebound after six days of red

Stocks on both Korean bourses rebound after six days of red 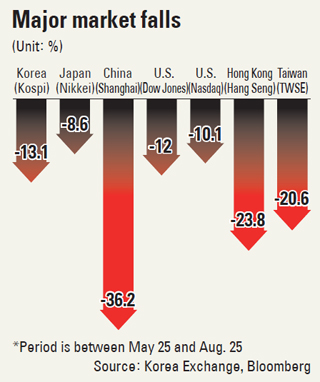 After six days of losses over panic about China, Seoul’s main Kospi bourse and its smaller tech-heavy Kosdaq turned around on Tuesday.

Investors were particularly drawn to the Kosdaq, which gained more than 5 percent, while the Kospi bounced back less than 1 percent.

This was in stark contrast to China. Shanghai fell 7.6 percent, its biggest plunge since 1996. The Shanghai composite index sank below 3,000 for the first time in eight months.

In hopes of turning the tide around, the Chinese central bank on Tuesday cut its benchmark leading rate 0.25 percentage points to 4.6 percent. It was its fifth rate cut since November.

The People’s Bank of China (PBOC) also lowered the reserve requirement for banks 0.5 percentage points. The monetary policy moves by the PBOC are likely to have a positive effect on the stock markets today.

But uncertainties still linger in Seoul, and some analysts see Tuesday’s cheer as nothing more than a temporary adjustment.

Some even speculate that the persistent insecurity on global markets - centered around China’s economy - could be as bad as the 2008 global financial meltdown or the European crisis in 2010.

Tuesday’s recovery was largely due to retail investors who swooped in to snap up stocks at low prices. Foreign investors, on the other hand, continued to offload shares, which they have been dumping for 14 consecutive trading days. It was part of their massive selling spree in emerging markets with high economic dependency on China.

“The Shanghai index is expected to keep dropping for a while, as low as 2,800 points, because investors seem to have lost trust in the Chinese government,” said Cui Xuehua, an analyst at Korea Investment & Securities. “The central government has recently stopped intervening in the financial markets, unlike its moves in June [when it lowered the interest rate and deposit-reserve ratio].”

The continuous sell-off by foreign investors is a major concern for Korea’s stock market, as foreigners account for 32 percent of total stock holdings.

Foreign investors have sold off 3.2 trillion won ($2.7 billion) worth of Korean stocks in the last two weeks.

Government officials and some analysts say the situation is different from 2008 or 2010 because Korea’s safety nets will cushion the blow.

“The situation that Korean companies face is different from the 2008 crisis,” said Hong Seung-pyo, an analyst at Samsung Securities. “Back then, the companies suffered from lowered corporate credit lines and had to sell assets. Now, the problem is an overall slowdown in the global economy.”

Hong doesn’t expect an exodus of foreign capital, but even if the selling continues, the size of the exodus will be smaller than in other emerging markets.

According to the Bank of Korea, the nation’s foreign exchange reserves were estimated to be nearly $370.8 billion in July, the world’s sixth largest. The nation surpassed foreign reserves of $300 billion for the first time in 2011.

“We have no liquidity problem in procuring cash for the coming three months,” said a senior financial regulator at the Financial Supervisory Service, who requested anonymity.

Other analysts said Korea cannot be too sanguine because the crisis this time won’t merely affect raw material exporters, but any country with a dependence on China.