Fraser-Pryce demonstrates how a sprint should be finished

Fraser-Pryce demonstrates how a sprint should be finished 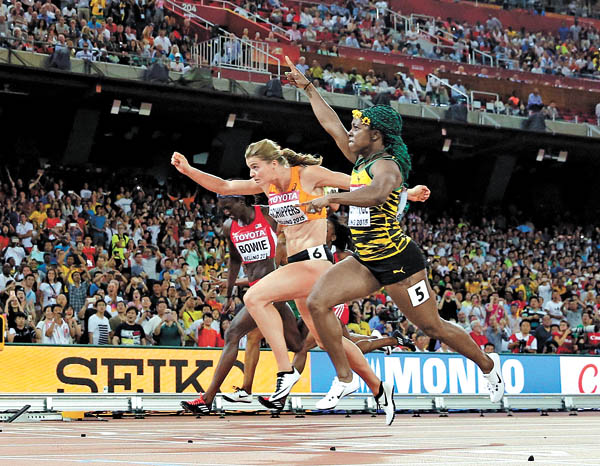 Jamaica’s Shelly-Ann Fraser-Pryce, right, celebrates after winning the final of the women’s 100 meters at the 2015 IAAF World Championships at the National Stadium in Beijing on Monday. [AP/NEWSIS]

BEIJING - They both lifted their arms to celebrate before the finish line.

For Shelly-Ann Fraser-Pryce in the 100 meters, this was no big deal. There was so much daylight between Fraser-Pryce and the runner-up, the Jamaican could have walked the last few steps and still taken gold.

For Molly Huddle in 10,000, a different story. While slowing down and raising her hands, she had no idea her American teammate, Emily Infeld, was sprinting behind her. Infeld caught up, shouldered her way past Huddle and crossed the line in front of her to capture the bronze.

These two scenes, played out 30 minutes apart at the Bird’s Nest, served as Monday night’s lessons in how to, and how not to, finish a race with a medal on the line at world championships.

Fraser-Pryce now has three of them in the 100 - all gold - making her the first woman to win that many in the 32-year history of the championships. They’ll go great with her green-colored hair lined with sunflowers, to say nothing of her two Olympics golds, the first of which came at this same stadium seven years ago.

“When I came here in 2008, nobody knew who I was. I didn’t know who I was,’’ Fraser-Pryce said. “I was just enjoying the moment and I won. So, now, coming back being the person I am with all the accomplishments, it kind of puts things in perspective.’’

The 28-year-old Fraser-Pryce is contemporaries with her country’s superstar, Usain Bolt. In some ways, she’s also equals with Bolt, who also has three career 100-meter golds at the worlds and two at the Olympics. Yet, as an illustration of the multi-megawatt difference in their star power, there were a grand total of nine reporters waiting for Fraser-Pryce when she came through the interview area about an hour after her win. The night before, that number was in the hundreds after Bolt squeezed his way to a victory over Justin Gatlin in 9.79 seconds.

One thing Bolt has that Fraser-Pryce doesn’t is the world record. And while nobody has gotten within .1 second of Florence Griffith Joyner’s 1988 mark of 10.49, Fraser-Pryce knows she could enhance her legacy by getting into the 10.6s - a place she has never been.

Sensing a less-than-perfect start, she knew early it wouldn’t happen on this night. Still, she opened a two-body-length lead over Schippers that could’ve been expanded had she run hard to the line. Asked when she knew the race was over, Fraser-Pryce responded: “At the start.’’

Easy to celebrate early under those circumstances. But shutting down early can be a risky proposition, especially if the runner isn’t completely aware of her surroundings.

That was the case with Huddle, the American 10,000-meter champion, who threw her hands in the air while running in Lane 2, with one step left before the finish line.

Yes, she looked to have third-place sewn up in a race won by Vivian Cheruiyot in a leisurely 31 minutes 41.3 seconds. But as Huddle eased into the line, Infeld blew by her on the inside to take America’s first worlds medal in the 10,000 since 2007.

“This was a little bit bizarre,’’ said fifth-place finisher Sally Kipyego, who went to congratulate Huddle until she realized it was Infeld she should be hugging.

Other gold medals Monday went to Shawn Barber of Canada in the pole vault after Olympic champion and world-record holder Renaud Lavillenie again missed out on the world title; Ezekiel Kemboi of Kenya in the steeplechase, who won his fourth-straight world title; and Caterine Ibarguen of Colombia, who has now won 29 straight events in the triple jump.