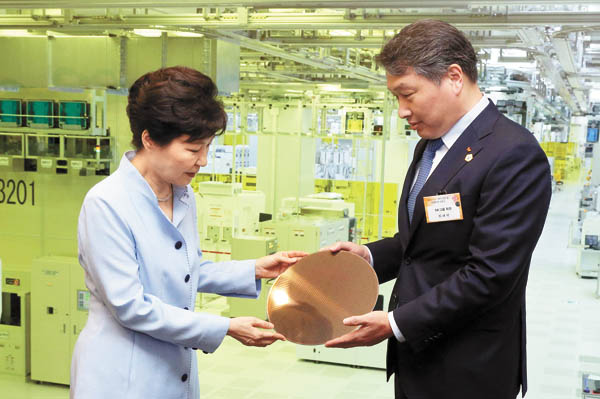 The remaining 31 trillion won will be spent on building two new semiconductor production facilities in Icheon and Cheongju, North Chungcheong, through 2024, the chip maker said.

SK Hynix CEO Park Sung-wook announced the plan at an event to mark the completion of the M14 line, which was attended by President Park Geun-hye and other high-ranking government officials.

The company said it will aim to produce 3,000 sheets of wafers every month by the end of this year and gradually increase production.

Still, the company has yet to decide on the type of products to be made at the two new plants.

“We can’t tell the specific type,” said Son Kyung-bae, senior manager at SK Hynix. “The purpose of the decision is to ensure sufficient capacity of our chip lineups. The type of product will depend on market conditions.”

The senior manager said SK Hynix has spent 2.38 trillion won out of the 46 trillion won funds building the M14 plant.

Chey’s massive investment appears to be part of both the chip maker’s business strategy and his attempt to meet the government’s tacit expectations for SK to contribute to reviving the economy through investment and employment - which some believe led to the presidential pardon.

The chairman had his conviction for embezzlement expunged as President Park included him on the pardon list for the 70th anniversary of Korea’s liberation from Japanese colonial occupation on Aug. 15.

Chey expressed expectations at Tuesday’s ceremony that the funding plan will benefit both the country and SK Hynix.

“SK will exercise investment plans swiftly and further expand it going forward to ensure the competitiveness of SK Hynix as the world’s leading chipmaker and Korea’s status that it is strong on semiconductor production,” he said.

On the release, he embarked on long-term business undertakings as well as day-to-day duties.

Chey hosted a lunch to meet with CEOs of the group’s 17 major affiliates on Aug. 17, two days after his release. He urged the heads to expedite investment and submit lists of business sectors in need of funds. Members of the SK SUPEX Council, the highest decision-making body that oversaw the group during the chairman’s absence, also attended.

To keep pace with overseas businesses, the scion of SK’s founding family is scheduled to leave for China today to check SK Hynix plants there.

But the latest move is not all about keeping good ties with the government. Robust demand for DRAM used in mobile devices has raised the specter of expanding production lines for the world’s second-largest DRAM producer.

Built in 1994, the existing facility in Icheon started off producing 200 mm wafers but later converted into a 300 mm wafer facility in 2005.

Despite the shift, some industry watchers say there is a need to extend facilities to meet global demand.

SK Hynix constituted a 23.89 percent market share in the mobile DRAM market in the second quarter, according to market research firm DRAMeXchange on Aug. 18. The share is the second highest after Samsung Electronics, which holds a 57.62 percent share.

Some worry the massive expansion of DRAM lines might lead to oversupply, and pricing pressure could push down margins of the chip maker, as competitors Samsung and Micron also expand production lines for mobile DRAM. Skeptics feel sluggish demand for smartphones and computing devices in its key markets, especially China, will also put pressure on margins.