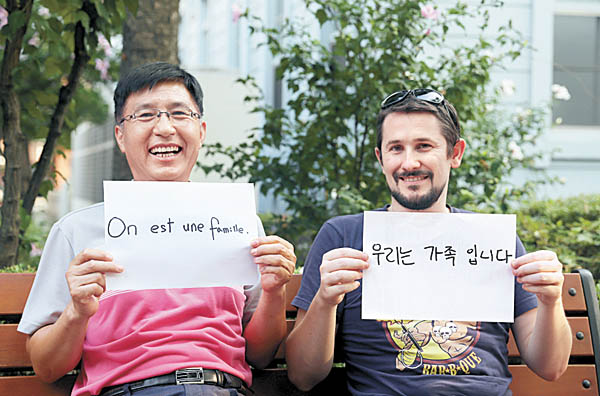 Kim Yong-sin, 61, left, and his French son-in-law Clement Charles hold cards that read “We are a family” in French and Korean at the Korea National Open University (KNOU) in central Seoul. Provided by KNOU

As the number of international marriages in Korea has increased, so too has the number of people in their 60s who have taken up foreign languages in an effort to communicate with their sons- and daughters-in-law.

Of all the recorded marriages in the country last year, there were more than 23,000 international couples wed in Korea, accounting for 7.6 percent of all unions.

“I learned French briefly when I attended high school,” said Kim Yong-sin, 61, who is currently majoring in French at Korea National Open University (KNOU). “I remembered all the words and grammar once I saw them, but now I forget it as soon as I leave my desk and it takes an hour just to memorize a word.

“But I can’t give up because my granddaughter, who was born this year, likes my children’s songs in French.” 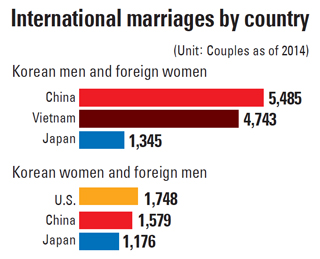 Kim formerly ran a chemical raw-material manufacturing company. His daughter married a Frenchman, Clement Charles, four years ago. At the time, Kim didn’t particularly have a need to learn French because his son-in-law has an interest in Eastern cultures and his Korean quickly improved.

However, it was meeting Charles’ parents that convinced Kim to learn French. They visited Korea two to three times a year, when Kim could definitely feel the language barrier.

“Clement’s father really likes drinking soju at cart bars,” Kim said. “We finally found something in common but I couldn’t say a thing to him. About two years ago at a grocery store, I wanted to ask him ‘how do you say tomato in French?’ but I had to use body language. That was when I made up my mind.”

As he commuted between his house in Incheon and workplace in Uijeongbu, Gyeonggi, he used the entire three-hour subway ride to memorize words and sentences and often talked to his son-in-law in French. He didn’t sleep much while preparing for midterms and finals, which seriously worried his wife.

But he pulled it off. He can talk to his granddaughter in French, and he even attended a chanson festival at the university earlier this year with Charles.

Choi Ok-bun, 63, another student at KNOU, also began to practice Japanese for her daughter-in-law. Her son formerly worked at the headquarters of Honda Motor Company in Japan and tied the knot with a Japanese woman last year.

“I strongly opposed him getting married to a Japanese woman, but the one that he brought home three years ago was very kind and pretty,” Choi said. “I thought I’d better learn Japanese.”

After she was accepted to the university, she began learning the Japanese alphabets, which she said was difficult because “Japanese characters are like drawings.”

But she kept at it, studying with her husband and even staying up nights for exams. Choi sometimes wanted to quit, but continued, motivated by the expression, “The life begins from 60 and well begun is half done.”

Her Japanese is now good enough that she can talk about the events in her daily life.

“It was difficult to say anything to my daughter-in-law at first, but now she sends me pictures first and we talk to each other a lot.

Some local governments are even providing programs for parents with foreign sons- and daughters-in-law. The Dong District Office of Busan, for example, runs Kakkawo Talk that teaches Vietnamese.