Chung warns vote for top FIFA job is under threat

Chung warns vote for top FIFA job is under threat 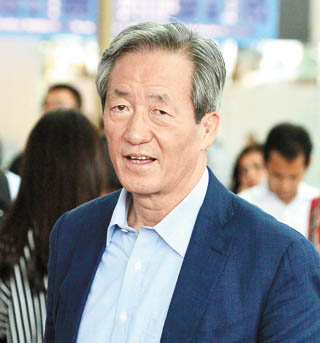 The election for the top job in football’s governing body is in danger of “being manipulated to a degree unseen even in previous notorious FIFA presidential elections,” FIFA presidential candidate Chung Mong-joon said.

Chung, a former FIFA vice president, said on Wednesday that FIFA can recover its image that has been marred by a corruption scandal being investigated by U.S. and Swiss authorities.

“Whether or not the upcoming FIFA presidential election takes place according to due process, fairness and openness will be the litmus test for whether or not genuine reform of FIFA will be possible,” he said.

Last week, Chung, who is now honorary president of the Korea Football Association, announced his bid to replace current FIFA president Sepp Blatter, who decided to step down shortly after winning a fifth term earlier this year, following the FIFA corruption scandal.

He is one of the candidates for the top job along with UEFA president Michel Platini, Brazilian football great Zico and Liberian football association chief Musa Bility. The election is set for Feb. 26 next year.

Since launching his campaign, Chung has been fighting negative reports. The 63-year-old billionaire recently refuted allegations that in 2010 he allegedly tried to influence the vote for Korea to host the 2022 World Cup.

He was also bothered by a report that FIFA’s ethics committee is investigating charity donations made by him. According to Bloomberg, Chung donated $500,000 to Haiti following the 2010 earthquake, and provided $400,000 to Pakistan after floods the same year. The money was originally for developing football projects in those countries.

“Unfortunately, there are increasing signs that the election is deteriorating into a typical FIFA affair, with selective leaks of so-called ‘confidential’ information, accusations of wrongdoing based on ‘unconfirmed reports’, un-named ‘sources’ and ‘insiders’,” the statement from Chung said.

“To be clear, contrary to recent press reports based on FIFA leaks,” Chung said, “[I am] not facing any criminal charges or allegations of bribery, fraud, corruption, vote buying or even a breach of ‘conflict of interest’ under the FIFA Ethics Code.”