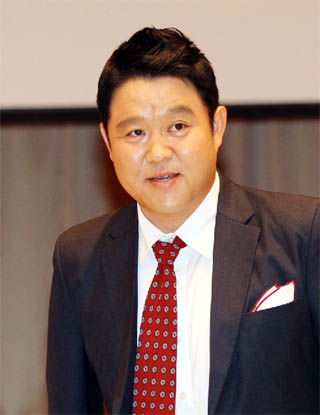 The former couple ended their 18 years of marriage as of Tuesday.

“I’m sorry that I have to bring up the news despite many people’s support towards my effort to maintain my family amid various difficulties,” Kim wrote.

“My ex-wife and I had been arguing over various family issues over the last two years and four months. And we realized that we had been hurting each other very deeply.”

According to Kim, even though they took various measures to fix their marriage, such as undergoing a marital counseling program, the two learned it would be difficult for them to stay together due to their personality differences.

Regarding their only son, Kim Dong-hyun, who is working as a rapper under the hip-hop label Brand New Music, Kim Gu-ra said, “Dong-hyun, who is in his second year of high school, will be living with me until he becomes a grown-up.”

“I will be responsible for Dong-hyun’s mom’s debt until the end,” the renowned entertainer added, “and I will also put my best effort toward becoming a better dad.”