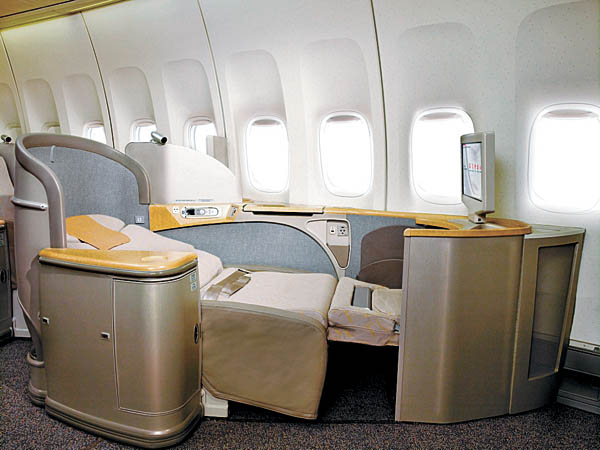 Asiana first class seats will be available only on the airline’s A380 fleet starting in 2017. Provided by the company

Asiana Airlines is set to eliminate first-class seats from most of its flights in a bid to curb massive losses amounting to more than 100 billion won as falling ticket prices have created a “crisis” of reduced revenue.

Kim Soo-cheon, CEO of Korea’s second-largest flag carrier, told employees in a video message on Tuesday that the airline’s first-class status is in an “absolutely inferior position” compared to its competitor and the company has decided to “choose and concentrate” on economy and business classes. He was referring to Korean Airlines, the country’s No. 1 carrier.

First class will remain only on the airline’s A380 fleet starting in 2017.

“The loss in the June-August period in the aftermath of the Middle East respiratory syndrome (MERS) outbreak amounts to about 150 billion won ($126 million) and the slow recovery of demand from China and Japan [will] deal a sizeable blow to earnings in September and the following months,” he said.

First class seats are notoriously expensive but barely contribute to profits, given low demand. For example, a round-trip first-class ticket from Incheon to New York costs more than 10 million won.

Hit by MERS from late May until mid July, and reduced tourism to Korea, the company posted net losses
of 85.4 billion won in the April-June period.

That compares to net profit of 59.6 billion won during the previous three months. Its second-quarter revenue also fell 5.4 percent year on year to 1.33 trillion won.

“The traditional growth tactic of pumping up supply, expanding routes and relying on tourism agencies for ticket sales has hit its limitation,” Kim said, promising to transform the
sales paradigm and concentrate on improving the company’s profit-loss structure.

Asiana currently owns 74 planes. The company operates First Class seats in four A380s, four B777-200s and two B747-400s. Eleven A320 planes and one B767-300 have a single class for domestic routes, a system adopted by most budget airlines. The airline plans to add two A380s next year.

While First Class will be reduced incrementally starting in 2017, the company plans to modify existing planes to raise the number operating a dual-class system. Earlier this year, Asiana announced it would establish a second low-cost carrier that will concentrate on flights from Incheon. The company has been operating its first budget brand Air Busan since 2007, which is based in Busan.

“Our plan to establish yet another low-cost carrier is part of the efforts to recover profits from short-distance routes that have cost competitiveness,” Kim said.

Korean Airlines set up its own budget carrier Jin Air in 2008. Other Korean budget fliers include Jeju Air, Eastar Jet and T’Way Air.