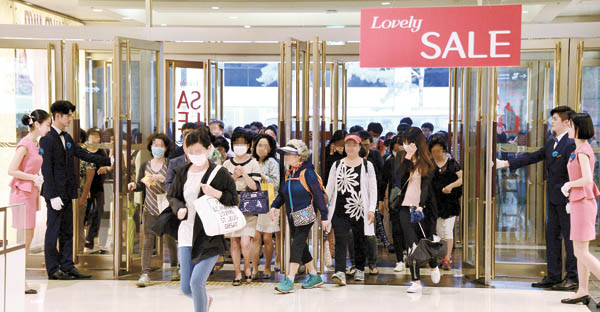 Customers rush in the moment Lotte Department Store in downtown Seoul opened its doors on June 26. The department store held several discount events to boost sales that were heavily hit by the Middle East Respiratory syndrome in June. [NEWSIS]

The main concern is whether that modest turnaround can pick up in the coming months, particularly as the domestic economy faces new risks like the decelerating Chinese economy.

According to the Ministry of Trade, Industry and Energy on Wednesday, sales at department stores in July grew 0.7 percent compared to the same month a year ago. Convenience store sales soared 31.4 percent, while hypermarkets, such as E-Mart, and neighborhood supermarkets run by major conglomerates saw their sales fall 1.8 percent and 0.1 percent, respectively.

“Due to various promotions, including sales events, department stores saw their sales increase in consumer electronic products, as well as foreign luxury goods like wristwatches and fashion wear,” a ministry official said.

Sales at hypermarkets retreated largely due to drops in sales of non-food products.

Convenience stores saw a significant increase in sales last month largely due to the price hike on cigarettes from earlier this year.

In fact, convenience stores have been enjoying a year-on-year sales increase in the last six months, growing on average 26.2 percent every month.

Although sales at hypermarkets struggled compared to department stores and convenience stores, the numbers are still considered a recovery after the devastating drop last month.

The drops were largely caused by the MERS outbreak. Although “patient zero” first emerged in May, the virus began to spread in June and forced people to avoid crowded places like major retailers. According to the Bank of Korea, the April-June period quarterly growth nosedived to 0.3 percent.

In the first quarter of 2015, the economy looked as if it was recovering, growing 0.8 percent compared to the fourth quarter of 2014.

Consumer spending, which grew 0.6 percent in the first quarter of 2015 reported a 0.3 percent decline in the second quarter.

But as the MERS situation stabilized in July, sales climbed back to pre-MERS crisis levels.

“For certain it seems the impact of MERS has subsided as the average sales growth rate has recovered to the previous March-May level,” the ministry official said.

The question is whether this momentum can continue into September, especially as the Korean economy is being pressured by an increasingly unstable global market.

The Korean stock market advanced on Thursday, along with the Chinese stock market and other emerging markets, largely thanks to the Chinese central bank’s policy changes announced late Wednesday, which included cutting the benchmark interest rate and lowering the reserve requirement for banks.

But the recent turmoil exposed the weak fundamentals of the Chinese economy, including massive credit loans, which could trigger large-scale panic in the market.