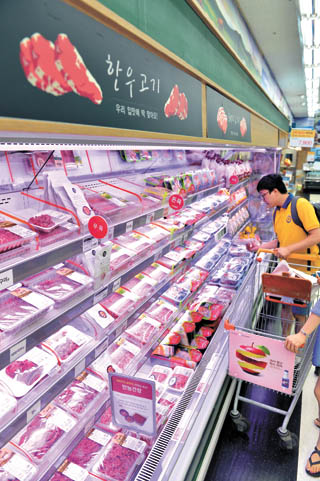 Korean premium beef, also known as hanwoo, sells at a major discount mart in Seoul on Wednesday. With the Chuseok holiday only a month away, hanwoo, which is popular as a Chuseok gift, has seen its price surge to the highest level in five years. According to the Korea Rural Economic Institute on Wednesday, the average wholesale price of 1 kilogram (2.2 pounds) of premium hanwoo was 21,246 won ($17.85) as of Aug. 21, 20.4 percent higher than the same period last year. [NEWSIS]