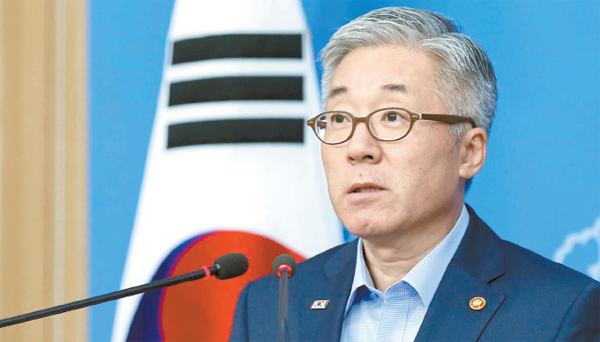 “We have to complete two wings - one of a creative economy and another of cultural prosperity,” President Park Geun-hye said on Aug. 15, during her speech commemorating the country’s 70th anniversary of independence from Japanese colonial rule.

In line with the president’s speech, Kim Jong-deok, the minister of culture, sports and tourism said, “We will create content that brings a modern reinterpretation of traditional culture and values, content that world citizens will be attracted to.”

One of the milestones made in such efforts is the K-Experience that will be established in 2017 in northern Seoul on land owned by Korean Air. The complex will have traditional Hanok-style roofs, five floors above ground and two floors below.

With the completion of the K-Experience, the cultural belt - connecting the National Palace Museum, Gwanghwamun, Gyeongbok Palace, National Folk Museum and National Museum of Modern and Contemporary Art (MMCA) - will finish nicely with Insadong.

He also has ideas to use “Arirang,” the famous Korean folk song and the country’s unofficial national anthem, as creative content for an outbound strategy, as well as use overseas Korean cultural centers as bases for spreading knowledge and understanding of Hangul and Korean cuisine.

The Joongang Sunday, an affiliate of the Korea JoongAng Daily, recently sat down with Kim for an interview, during which he was asked how he felt about his first year serving as the culture minister.

“As a civil servant, I am head of an organization. But there are also circumstances that force me to be political. Working for the people is a new experience for me,” he said. “There are also times when I feel fulfilled, when I am able to make possible things that as a professor, I had only wished for. Misunderstandings over appointments bring about hard times.”

Q. Controversies over political appointments persist. Are you getting feedback from experts?

A. I’ve had meetings with them since last year as groups. The left wing, the right wing, all of them. We don’t talk about, “How would ‘so and so’ do this?” We talk about what kind of person with what types of capabilities would do an excellent job in a particular role.

The seat for the director of the National Museum of Modern and Contemporary Art has been empty for 10 months.

We have kicked off a public appointment procedure. Applications will be accepted through September, and the interview process will begin afterward. Official appointments will probably be made in early to mid-October.

Isn’t that too long of a vacancy?

Yes, but we would like to have the right person for the job. The critical issue is that the status of the MMCA has become weak. The real issue is not who will become the director but how we can boost the status of the museum. In order to do that, we need to make the MMCA more corporate. If we keep doing things within the budget, as we have done, our business and plans will be downsized. Budgets are subject to reviews and inspections, so the organization is bound to face limitations.

Hasn’t the corporatization process of the MMCA stopped?

I re-started it. There are worries that the civil servant status [of the museum’s employees] may be threatened, but I told them that won’t happen. There are also worries that museums will only work on projects that will make money after becoming corporate entities, but the focus here is to do more things outside the budget limitations, not to do less.

What do you mean by boosting the MMCA’s status? Do you mean to make the MMCA something akin to New York’s Museum of Modern Art?

Yes, we have to. The MMCA has to keep up the pace. Our culture has become better-known worldwide. We need to look at how Hallyu has come to be what it has become today. Hallyu was not created by the government. We did not provide financial support for it. People involved in Hallyu were able to be competitive because they made efforts to survive. Efforts made to survive on its own after being made corporate and efforts to remain competitive will help the MMCA become a world-class art museum.

The director position will also be open to foreign nationals.

When a Korean artist goes abroad and becomes the director of an art museum or gallery, it is seen as a feat. But when a foreign national is considered to serve as the director of our museum, some argue that it’s essentially selling out your own country. In this day and age, that kind of talk just isn’t right. Directors of well-known museums in Singapore, Hong Kong and, in fact, Italy’s Maxxi Museum are foreign nationals as well. I’m not saying that we should seat a foreign national as the director of the MMCA, just that Korea’s art community is too cloistered. Even the people close to me are saying a foreign national couldn’t do the job, and I’m thinking, “How can we think like this?” I come from a design background. In the design industry, it’s a given that we compete globally. We cannot just claim that Korean [design] is the best because all types of products from around the world come in.

Is that the Hallyu 3.0 strategy?

Corporate participation will be important as well.

The last Wednesday of each month is Culture Day [part of President Park Geun-hye’s efforts to boost her signature creative economy initiative]. We encourage corporate participation on that day. Corporate sponsorship of cultural events was estimated to be around 177.1 billion won ($148.6 million) as of 2014. Despite the economic slowdown, corporate contributions have increased, and this is encouraging.

Of total corporate entertainment expenses, culture-related expenses are counted as tax deductible expenses by a ratio of 1 percent. We think that’s too small. We want to expand that to 10 to 20 percent.

The Middle East respiratory syndrome (MERS) has had negative impacts on the tourism industry. What is the government’s strategy in that regard?

The government has done everything it can - touring China, Hong Kong and Macau and meeting with people. We’ve met with local media and told them that we are MERS-free.

Seoul doesn’t have enough hotels. What is the government’s solution?

Over the past few years, the number of foreign tourists has jumped 10 percent, but there aren’t enough hotels to accommodate them.

We have come up with new proposals to increase the number of hospitality facilities, and we are hoping to get it worked out with the National Assembly within August.