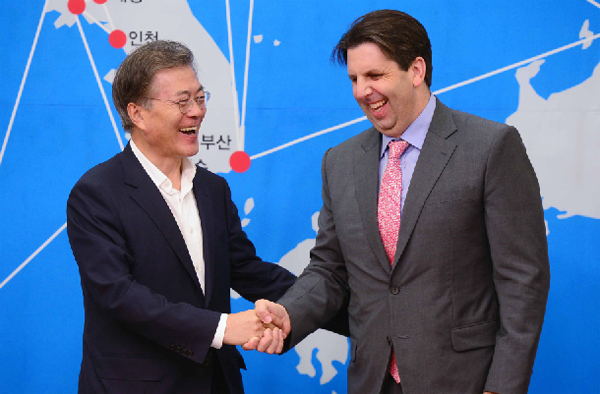 The chairman of the main opposition party proposed to the government on Wednesday a four-part plan to normalize relations and economic cooperation with Pyongyang, which includes holding inter-Korean family reunions with more than 1,000 people during the Chuseok holidays in September.

After North and South Korea forged a six-point agreement early Tuesday, Moon Jae-in, the leader of the New Politics Alliance for Democracy (NPAD), said at a Supreme Council meeting, “It is most important now to put the agreement into practice.”

“Since an agreement was reached between North and South Korea, plummeting stock markets have become stable,” he added. “The economy is about peace.”

Moon urged the Ministry of Unification “to actively negotiate with North Korea, setting a goal of inviting at least 1,000 people to take part in [inter-Korean] family unions.”

He emphasized that many Koreans had died before getting a chance to meet their relatives and that 80 percent of applicants were over 70.

There is a need, Moon emphasized, to speed along the process for the reunions, including setting up a permanent office on Mount Kumgang and checking survivor lists.

He also proposed resuming civilian exchanges, hosting joint events and upholding mutual respect for past inter-Korean negotiations. Some initiatives, he added, could include reviving friendly football matches between Seoul and Pyongyang and forming inter-Korean teams for the Pyeongchang Winter Olympics in 2018.

On Tuesday, after 43 hours of negotiations, a panel of four high-level officials agreed to arrange working-level talks next month over reunions for families separated by the war. The agreement also calls for renewing civilian exchanges via nongovernmental organizations across different fields.

The rest of Moon’s day was also dedicated to security issues. He attended a government forum on unification, diplomacy and security policy as well as a meeting on a special committee for peace and security on the peninsula.

In Moon’s talks with Qiu, he said that he would like to see China “take an active role in resuming the six-party talks,” according to NPAD spokesman Kim Sung-soo, at a time when the U.S. and South Korean governments appear to be setting forth conditions for resuming the dialogue to denuclearize Pyongyang.

Qiu responded that Beijing believes that the early resumption of the six-party talks will enable the denuclearization of the peninsula, Kim said.

The six-party talks with two Koreas, China, Japan, Russia and the United States have been stalled since Pyongyang walked out in late 2008.

Moon and Lippert discussed the recent high-level inter-Korean talks, how to resume the six-party talks, and the role of the “iron South Korea-U.S. alliance” in the standoff with Pyongyang, according to Kim.